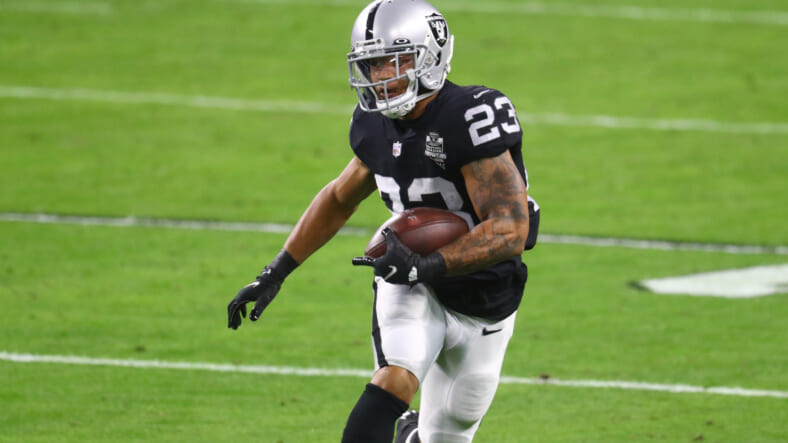 Devontae Booker has fallen into place as the top running back for the New York Giants as they head into a game with his former team. The Giants face the Raiders in week 9, but their depth at the running back position is cut down due to injury at the moment and Booker is the next man up for Saquon Barkley.

Barkley has been in doubt all week, and was confirmed to be out even after his positive COVID-19 test was revealed as a false positive. That’s because of the ankle injury that has kept the running back out since the Dallas game, and Booker will continue for another week as the starter in Barkley’s absence.

But Barkley isn’t the only one dealing with an injury. The Giants will also have to sit Gary Brightwell, who isn’t able to make it off the COVID-19 list in time to play in week 9.

The situation places a lot on Booker’s shoulders, and also makes for lonely days in the running backs room.

“I mean, itâ€™s been pretty much me in there,” Booker said, laughing about the matter on Friday. “Iâ€™m looking around like, â€˜whereâ€™s everybody at?â€™ But itâ€™s been tough, but just got to learn how to work through it and be safe.”

Booker does have some company, though. But you have to go a bit far down the depth chart before you get to the current backup running backs for the Giants.

The main names are Sandro Platzgummer and Elijhaa Penny. The former is a player that has hung around the level of the practice squad earlier this season, and the latter is more of a fullback.

Booker says there’s been days where those two are his sole company at the position.

“There were days like that pretty much all of this week,” Booker continued, pointing out that even running backs coach Burton Burns is absent thanks to a positive COVID test.

Against the Raiders, the Giants will surely rely on him more heavily due to their lack of depth in the run game. Considering how the Raiders are a team Booker is familiar with, this may just be an opportunity for Booker to have his biggest game yet with the team.