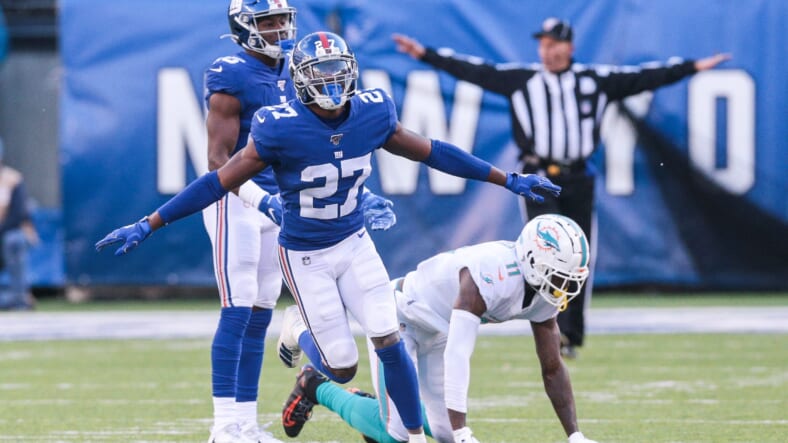 TheÂ New York GiantsÂ picked up their third win of the season this week. The Giants beat the Miami Dolphins 36-20 to improve their season record to 3-11. There were a few notable individual performances this week: Saquon Barkley rushed for 112 yards, Shepard caught 9 passes for 111 yards, and Sam Beal had 8 combined tackles with a safety.

There was another performance on the defensive side of the ball that was worth discussing. Rookie cornerback DeAndre Baker put together another solid game, continuing his season’s turnaround.

Baker was drafted in the first round by the Giants in this year’s draft. For most of the season, Baker has not looked worthy of that high draft selection. However, DeAndre has turned it around recently and has started playing some impressive football.Â

For most of the game, DeAndre Baker got the best of Dolphins’ wide receiver DeVante Parker. Parker did manage to haul in a robust touchdown reception on Baker in garbage time, but even that was a play that Baker had mostly good coverage. It was less of a poor play by DeAndre and more of an incredible play by DeVante.

DeAndre Baker recorded a respectable 5 tackles against the Dolphins. He also added 3 pass breakups and rarely allowed DeVante Parker to record a reception.

One play to note in Baker’s Week 15 performance can be looked at as both a positive and a negative. DeAndre was called for a pass interference penalty in this game, where he broke on the ball and got there a little early. Baker hit the intended receiver before the ball got there; thus, the penalty call was justified.

However, the bright side of this play is the fact that Baker actually made the play. Sure, he got there a bit too early, but he still got there. Had Baker taken a slightly better angle towards the ball (one where the receiver did not impede his ability to get his hands on the ball), DeAndre would have been taking that pass home for six points.

At the beginning of the season, this was a ply that Giants fans could not even picture Baker making. Whenever the ball was thrown DeAndre’s way, and he was beaten, he was always beaten bad. Too bad to make a play on the ball. But in recent weeks, the first-round corner has been making plays.

DeAndre Baker has recorded 5 pass breakups in the past two weeks. The rookie cornerback has turned a corner and is showing steady improvement week-to-week. The Giants should be highly encouraged seeing their first-round cornerback putting his game together towards the end of the 2019 season- a hopeful sign for 2020 and beyond.