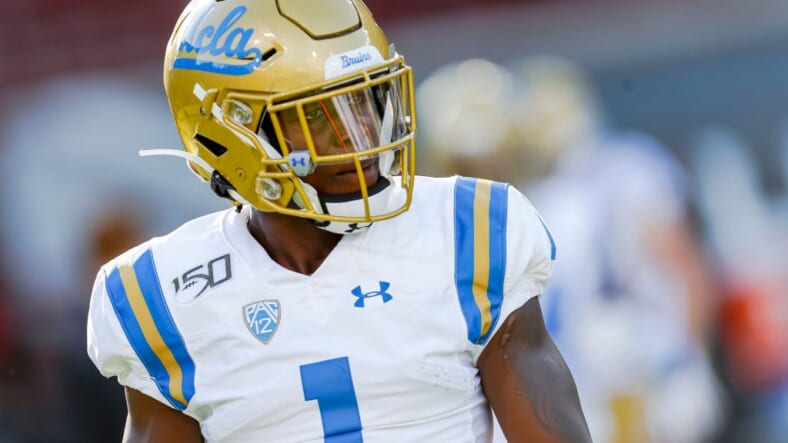 CINCINNATI, OH – AUGUST 29: Darnay Holmes #1 of the UCLA Bruins is seen before the game against the UCLA Bruins at Nippert Stadium on August 29, 2019 in Cincinnati, Ohio. (Photo by Michael Hickey/Getty Images)

Taking a look at New York Giants‘ draft pick Darnay Holmes and what he brings to Big Blue:

When a player like UCLA cornerback Darnay Holmes comes across your draft board, you might want to think twice about passing on him. The New York Giants selected Holmes in the fourth round of the 2020 NFL draft, and after deep-diving into his qualities and traits, I can confidently say this is one of the more exciting and intriguing selections by GM Dave Gettleman and Co.

At first glance, Holmes is a 5-foot-10 corner that plays much bigger than his frame indicates. He is strong off the line of scrimmage and can match up well with receivers on the boundary. However, he was ranked as one of the top nickel corners in the draft, despite having barely played at the position.

The Giants desperately needed help on the interior, and Holmes can provide the talent they are seeking. Prior to his drafting, the Giants had Grant Haley, Julian Love, and Corey Ballentine at the position, all of which are decent players with limited upside. Holmes acquires the athleticism and natural talent to develop into a regular starter at the position rather quickly.

His story, though, is worth talking about, as it will make you a firm believer in his abilities. According to Chris Pettit, the Giants’ top scout, Holmes is a unique talent and one of the hardest-working players heâ€™s ever come across in his 15 years doing the job.

Darnay Holmes is someone, we interviewed him down at the Senior Bowl. Heâ€™s really at the top of it, just the way he came in and took over the room. Heâ€™s one of the hardest working players that Iâ€™ve evaluated in my career. All of the stuff that Iâ€™ve gotten back and all of the positive qualities about him. Iâ€™m really excited about what heâ€™s going to bring to our team.

Holmes has battled a problematic life up to this point, nearly losing his father at a young age. His father, who is formally an NFL player, was shot seven times in a drug deal gone bad. Luckily, he recovered from the tragic incident, teaching Holmes an essential lesson about responsibility and the meaning of life. He made it his goal to provide a better standard for his family and rise above his father’s past actions.

Having gone from eating out all the time and enjoying a quality lifestyle to eating fast food every day of the week, he embodied a spirit that demanded more for him and his family.

As a junior in college and the team captain of the football club, Holmes set out to increase his draft stock and join the ranks of the NFL this year. After suffering an ankle injury in 2019, Holmes was limited significantly but refused to take the six weeks required to heal properly. He played through the injury, showing off his toughness and ability to lead at a high-level. He graduated from UCLA in three years, a significant feat to accomplish while also being a top student-athlete.

The most humbling part of his journey is when his mom was evicted and forced to live with Darnay and his roommate at school. Holmes made the sacrifice to sleep at the UCLA football facilities so his mother could sleep in a bed comfortably. Holmes said he played some of his best games while sleeping on stacked pallets in his biography penned on The Players Tribune:

When I wasnâ€™t staying at my apartment, I would sleep at the football facility. Iâ€™d pile up as many pillows and blankets as I could to create a makeshift bed â€” itâ€™s called pallets for the ones who know â€” and it wasnâ€™t so bad. I guess under the circumstances some people might have felt embarrassed, but that never registered with me. I knew I had done the right thing for my mom and my family, and thatâ€™s all that matters.

His determination to succeed in his junior year is a product of a seed he planted long ago. His injury severely damaged his draft stock, but the potential he holds as a fourth-round pick could be one of the bigger steals in the draft by the Giants.