New York Giants: Darnay Holmes can be more than just a slot corner 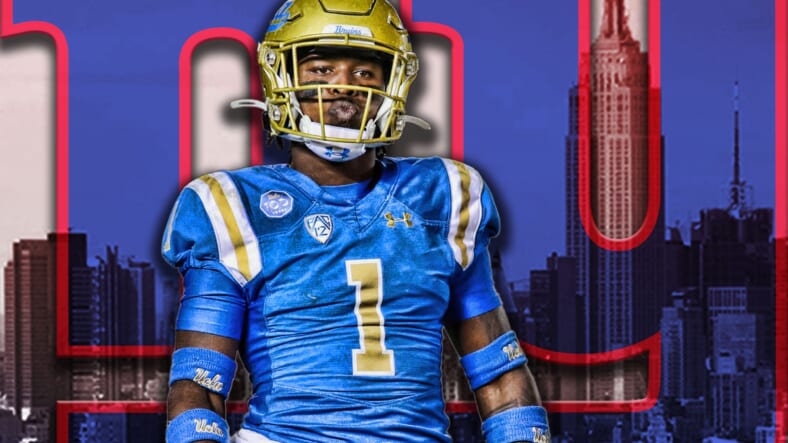 When the New York Giants initially drafted Darnay Holmes out of UCLA, most assumed he would fill the nickel corner position at the NFL level. Having never played an interior corner spot, Holmes experienced his first reps during the Senior Bowl, where he dominated opposing pass-catchers.

However, without any live game action in the slot, it is impossible to know what heâ€™s capable of at the NFL level. There is no question his frame fits the mold for the position at 5-foot-10 and 195 pounds.

The expectation is that the Giants will inject him into a competition battle with Grant Haley, Julian Love, and potentially Corey Ballentine. Holmes has fantastic physical traits and athleticism, making him an excellent option to fill a position that has been problematic for the past few years.

But Holmes is more than capable of playing on the outside, and as we await the results of DeAndre Bakerâ€™s case, which has since become more complicated, Holmes should be training for both spots.

Considered to be one of college football’s rising stars, Holmes had a tough 2019, as he suffered a high ankle sprain. However, being a team captain and leader, Holmes returned far too early and played on the injury despite medical advice. He ended up playing in 10 games, logging 23 solo tackles, 33 total, two interceptions, six passes defended, and zero forced fumbles. The injury clearly affected his production, but with that issue alleviated, the expectation is that he can return to form in 2020.

What makes Darnay Holmes so versatile for the New York Giants?

The Giants have plenty of players in their secondary, the issue is none of them are proven aside from James Bradberry. If Baker and his legal issues are not solved within the next few weeks, Holmes could be asked to compete at both the slot and outside corner positions. He has the experience and tenacity to succeed at both.

NFL analysts projected him as a nickel corner in the NFL, as he is a bit short and light to match up against bigger receivers on the outside. While I do think he will end up at that position, allowing him to compete on the outside is beneficial for the entire team. His exceptional intelligence, character, and work ethic make him a great candidate to land a starting job in his rookie year.