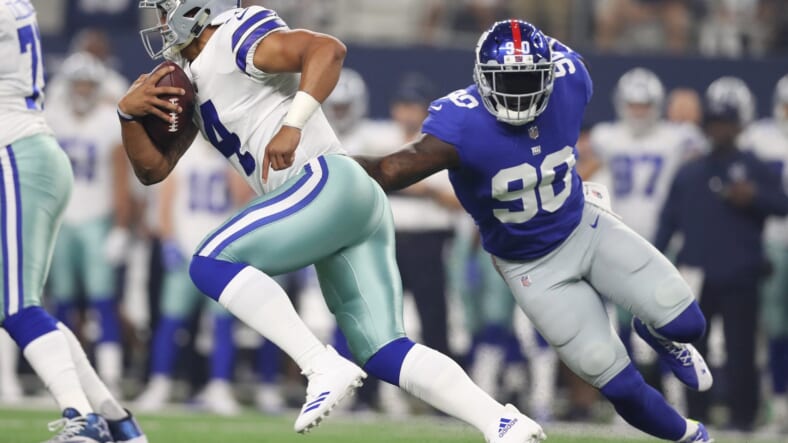 The Dallas Cowboys are not just a historical rival of the New York Giants but one of their main competitors within the division, and anything that hurts the Cowboys’ chances of winning the division again is something that benefits the Giants. Dallas won the NFC East in 2018 but they weren’t considered a strong division champion compared to others from the same year – in fact, the entire NFC East lived up to the ‘NFC Least’ moniker that it’s gained during some years.

But winning the division again isn’t a given for the Cowboys, even if the other teams are moving slowly when it comes to turning themselves into divisional contenders. Still, both the Giants and the Redskins have made strides, and it looks like the Cowboys might have been dealt a blow in the form of the contract demands of their quarterback, Dak Prescott. According to the Star Telegram, Prescott is looking for a contract worth $34M annually, which would make him higher paid than Philadelphia quarterback Carson Wentz.

Wentz recently signed the biggest deal that the Eagles have ever made, worth a total of $128M. The per season amount comes to $32M, which is two million a year less than what Prescott is looking for.

Prescott is in the final year of his rookie deal but it remains to be seen what the Cowboys are going to do with his contract after failing to contend for the NFC title with both Prescott and star running back Ezekiel Elliot on their roster, alongside other teammates who have varied in quality depending on the year.

If the Cowboys do sign Prescott to the large deal, it will tie up funds and prevent them from using them on other players – which could be especially harmful if Prescott fails to perform as well as other franchise quarterbacks who are making such numbers. While Prescott has definitely been good throughout his career, his career hasn’t been without struggles at times, even recently.

The New York Giants on the other hand should save on the quarterback position after keeping Eli Manning around and drafting Daniel Jones as an eventual successor. Jones will obviously cost less as a rookie compared to veterans such as Wentz and Prescott, and Manning may be off the payroll in the coming years following retirement. However, the most important thing isn’t the salary cap, but winning. And we’ll see in a year or two if the Giants’ cap savings, and Daniel Jones himself, are enough for them to win with.