New York Giants could target electric receiver in 2nd round 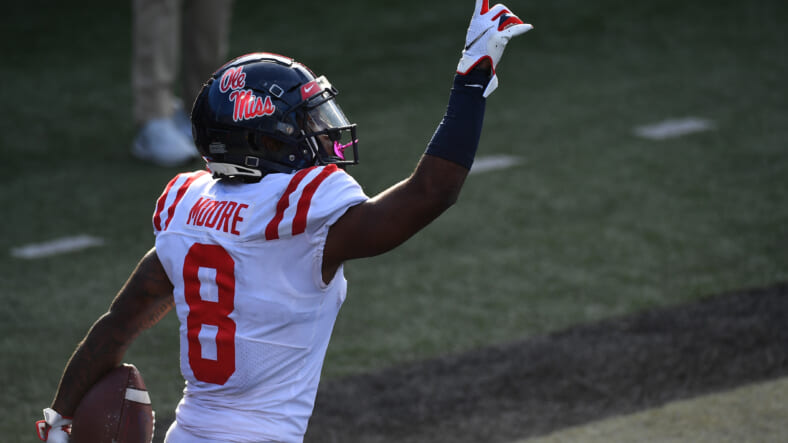 The New York Giants are still looking for offensive support this off-season, whether it comes through the NFL draft or free agency. One way or another, they need to offer quarterback Daniel Jones more weapons on offense, otherwise, he will struggle once again to get things going in the passing game, and his protection may be lackluster for the third season in a row.

As we know, the Giants had the 31st ranked offense in 2020, averaging 17.5 points per game and had the worst-rated pass-blocking OL in the NFL. Coordinator Jason Garrett also developed poor route concepts but put together a decent running game that the Giants were forced to rely on. Opponents simply played cover-0 and cover-1 for most of the contest, forcing the Giants to get rid of the ball quickly and make the receivers beat man-coverage. Ultimately, their plan worked for the most part, but the Giants’ defense rose to the occasion and helped them extract a few improbable wins.

Now, the Giants are looking toward this off-season to help Jones, and thereâ€™s one receiver in the second round that could fit the bill.

While Moore has a mid-second-round grade, if a team likes a player for their scheme, it is never too early to make that selection after the first round. Traditionally, taking the best player available is the most efficient thing to do in the first, but the Giants have the 43rd overall pick and can draft an immediate impact player to help their offense. There are several options that meet the eye, including Rondale Moore from Purdue or even Terrace Marshall from LSU if he happens to drop.

Moore, though, had a fantastic 2020 campaign, posting 1193 yards and a touchdown over just eight games. He averaged 13.9 yards perception, a career-high. In fact, all three of these categories were highs for him at Mississippi, and now heâ€™s preparing to make the transition to the NFL. As a former four-star recruit, Moore is 5-foot-9 and 184 pounds but plays with fantastic strength and elusiveness in the open field.

Elijah Moore running a beautiful sluggo (slant and go). He's going to be a stud. pic.twitter.com/3knhR8JNbD

Moore has the ability to align inside and out, but his dynamic style of play is what makes him so attractive. He has fantastic agility and the ability to stop on a dime and change direction. He isnâ€™t the most refined route runner, he has fantastic speed and the ability to break tackles in the open field. He is a big-play threat at any given moment, which is something the Giants desperately need to help Jones in the short/intermediate range of the field.

One of the major attractions when it comes to Elijah is his ability to separate — which the Giants struggled with considerably in 2020. I see him as a stellar receiver in the 0-15 yard range, which is exactly what the Giants need for Jones, especially if the OL is going to be lackluster in pass protection again. Jones needs to get the ball out quickly, and having a receiver who can create separation and present a reliable target is a positive. The problem, he is small and isnâ€™t much of a contested catcher but rather utilizes his speed and agility to get open.

While I likely wouldnâ€™t select him with the 43rd overall pick, if the Giants executed a trade back and acquired another selection in the 2nd, I would consider him a few spots back. He has the ability to make an impact right away, and he would fit the Giantsâ€™ game well in the slot to replace Golden Tate.

Fade Elijah Moore at your own risk🤫