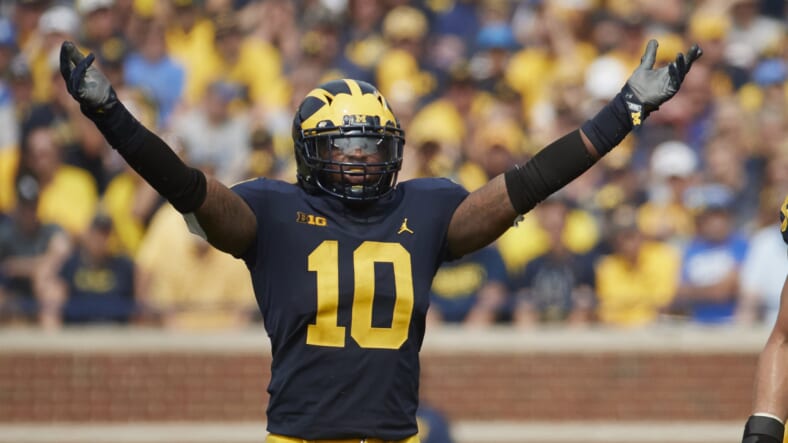 Finding a dynamic complement to New York Giants linebacker Alec Ogletree in the 2019 NFL Draft should be a priority in the first-round. The Giants acquired the No. 17 overall pick in the Odell Beckham Jr. trade, which allows them to address another position of weakness with premier talent.

Utilizing the added selection to bolster the middle of the defense would be an efficient move for Big Blue, as fourth-year player B.J. Goodson has failed to make a significant impact since his inception. One option the Giants should look into is Michigan defender, Devin Bush.

The New York Giants might have to settle for the second-best option:

While it’s unlikely Devin White, the star linebacker from LSU, falls to the No. 6 pick in the draft, Bush offers value in the middle of the round. One of the more intriguing aspects of his game is his ability to drop back into coverage. Bush is a pure “WILL” inside linebacker, opposite Ogletree who plays in the middle of the defense as the “Mike.”

Bush’s unique athleticism and ability to cover running backs and tight ends efficiently offer a different type of skill set to the Giants. Having struggled in recent years in regard to covering tight ends, adding a player like Bush makes complete sense – it contributes to the secondary and helps contain premier pass-catching running backs.

NFL.com has Devin Bush graded out as an instant starter – despite a lack of size at 5’11”, 234-pounds, there’s room for growth. The cons primarily center around his tangible traits – missing tackles due to lack of length and being caught up in blocks as a consequence of lack of size.

Devin Bush is a dawg pic.twitter.com/bNQ6O6M4mV

This is just a short clip of Bush’s skill-set. He’s very quick to identify the ball carrier and make a play on the ball. His lack of size is apparent, but his burst of energy and speed can make up for the deficiency.

Now, take a look at this range:

Incredible speed to reach the boundary-bound runner, chasing him down and keeping the gain to about two-yards with nobody beyond Bush. This is the value he offers in terms of sideline-to-sideline range, which is essential for a linebacker at the next level.

Based on his clear-cut abilities, Bush seems to have the exact skill set to fit well into the Giant’s 3-4 defense. Aside from his pairing with Ogletree, I feel as though he would be deadly lined up alongside Jabrill Peppers.