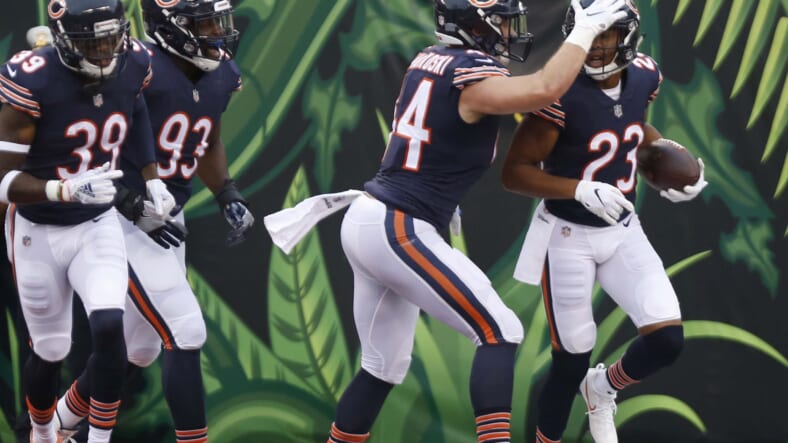 The New York Giants are in the market for a new linebacker to man the middle of the field, presumably alongside Ryan Connelly, who climbed the roster in 2019 and overcame Alec Ogletree for the starting job.

Ogletree was recently cut from the team, saving the Giants $13 million in cap space, which allows GM Dave Gettleman to allocate resources toward the position.

One underrated player the New York Giants should pursue is Bears’ Nick Kwiatkoski:

Having started for the Bears last season, the 26-year-old middle linebacker brings athleticism and range to the defense. His 76 combined tackles and eight tackles for a loss attests to his run-stopping ability, and his 59.5 completion percentage shows he can hold up in coverage as well. However, he did post an 11.6 missed tackle percentage last season, which isn’t a bit high compared to better linebackers in the league.

Kwiatkoski remains a great option for the Giants, despite his missed tackle rate, as there’s room for improvement in the tackling department. New head coach Joe Judge and LB coach Bret Bielema should theoretically be able to evaluate his capabilities and bring the best out of the young defender.

“He’s like our little hidden gem, our utility guy, and whenever we need him, whenever his number is called, he’s always ready. He’s one of the smartest guys on the defense.”

The Giants did just re-sign David Mayo to a three-year, $8.4 million deal, which solidified the reserve linebacker position, especially since Mayo will play on the special teams unit as well. Kwiatkoski, though, has the potential to move around the defense and feature in different roles, as well as on special teams. A defense can’t have enough quality players in the middle of the field, and if they can land him on a cost-efficient deal, he would be a great player to look into.