New York Giants could be considering a reunion with Odell Beckham Jr. 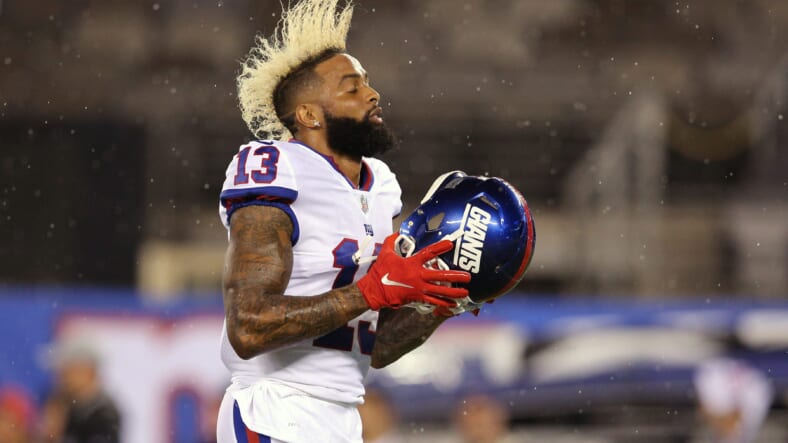 The New York Giants stayed still at the 2022 NFL trade deadline despite rumored interest in trading for a wide receiver. Instead, Big Blue traded away a wide receiving (Kadarius Toney) and opted to roll with what they have for the rest of the season. However, the free agency market is still an option, and a familiar face could be considered as the season progresses. The New York Giants could be considering a reunion with free agent wide receiver Odell Beckham Jr. as general manager Joe Schoen admits he has been in contact with Beckham’s representatives.

New York Giants general manager Joe Schoen mentioned this week that Odell Beckham Jr. is a player that the team would “consider” signing at some point this season. Schoen added even more fuel to the fire in an interview with “Tiki and Tierney,” saying the Giants are “in contact with his representatives.”

“We’re gonna do our due diligence all the time and he’s a guy that we’ve, you know, we’ve reached out to his representatives, we’re in contact with his representatives, where he is in his rehab, what he’s projected to be, whether it’s four weeks from now or five weeks in terms of his health, when he’s gonna be available again,” Schoen said on the Tiki and Tierney.

Joe Schoen said that the Giants will remain in contact with Odell Beckham Jr. and monitor his injury progress. Dan Graziano and Jeremy Fowler of ESPN are reporting that Beckham may not be fully ready to play until December. If the Giants want to pursue OBJ, they will likely be waiting until the final weeks of the regular season to inject him into their lineup.

The Giants will also need to compete with other teams if they want to bring Beckham back to the Big Apple. The Rams, Bills, Chiefs, and Packers are all reportedly interested in the 2014 first-round pick out of LSU.

Odell Beckham Jr. appears to at least have some interest in returning to New York. The free agent recently expressed a desire to see the team “return to the mountain top” on Twitter:

Odell Beckham Jr. is a 30-year-old free agent wide receiver recovering from an ACL injury he suffered in February. The impact that he would be able to make on the Giants’ offense is unknown. When Odell was healthy in 2021, he was a solid receiving option for the Los Angeles Rams. Beckham put up 305 yards and 5 touchdowns on 27 receptions in 8 games with the Rams. If Odell Beckham Jr. is healthy and ready to go, he could make sense as an end-of-year signing to help the Giants excel in the postseason.