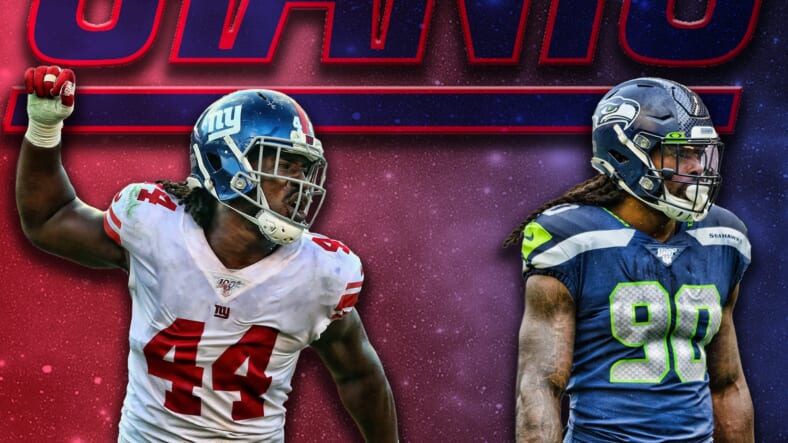 The New York Giants are in need of a pass-rusher heading into the 2020 NFL offseason. Free agency begins next month and the Giants have over $70 million to spend. The team has been linked to top-tier free agents such as Jadeveon Clowney. But the Giants have an edge rusher of their own that’s set to be a free agent next month.

Markus Golden will be a free agent this offseason after an impressive bounce-back season as a member of the New York Giants. Coming off of an injury, Golden signed a one-year deal with New York and totaled 10 sacks while starting in all 16 games. Despite this, most are not sold on Golden as a primary pass-rusher. The Giants are reportedly one of the teams interested in signing edge rusher Jadeveon Clowney. But how big of an upgrade is Jadeveon Clowney over Markus Golden? And is Clowney worth the contract that he is set to receive this offseason?

Jadeveon Clowney is widely regarded as one of the best edge rushers in the NFL. However, teams will be cautionary when considering signing him. Clowney has a bit of an injury history and played in only 13 games in 2019. In those 13 games, Clowney totaled only 3 sacks and 31 combined tackles. But once Clowney was fully healthy for the playoffs, he took his game to another level.

The Seattle Seahawks played two playoff games this season before being eliminated. In those 2 games, Clowney dominated and totaled 1.5 sacks, 3 tackles for loss, and 12 combined tackles. He was all over the field for Seattle’s defense and was clearly their best defensive player.

Markus Golden did have a much better statistical season than Clowney. He played in 16 games and totaled 10 sacks, 72 combined tackles, and 13 tackles for loss. One criticism that many people have on Golden is that a lot of his sacks were “clean-up” sacks and he was not really applying consistent pressure. But Golden’s production will come at half of the price of Jadeveon Clowney. Clowney is regarded as one of the league’s elite run-defenders, but he is not necessarily a dominant pass-rusher either.

It would be risky to invest a lot of money into either one of these players. However, both of them would fill a huge need for the Giants in 2020 and beyond.