New York Giants come back to win over Baltimore Ravens, bolster record to 5-1 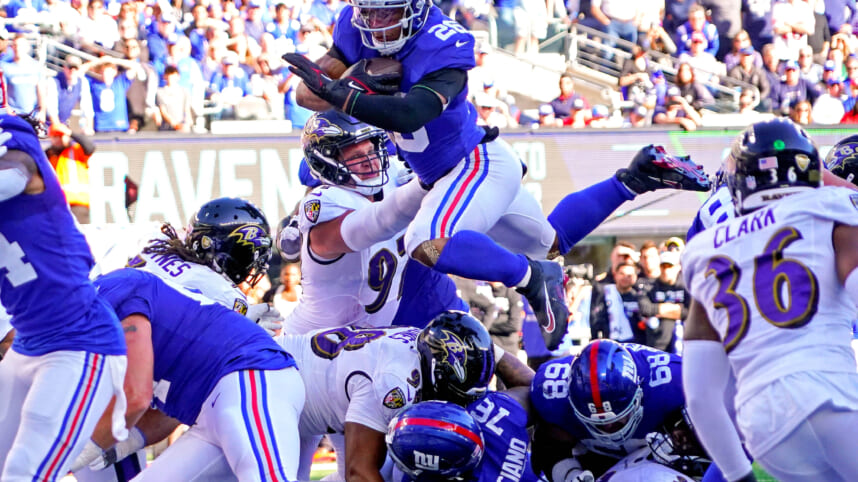 The New York Giants beat the Baltimore Ravens today, improving their record to 5-1 on the season. The Giants came back to accomplish a 24-20 win over the Ravens after being down for the majority of the game. New head coach Brian Daboll continues to make his case for Coach of the Year as he led his team to their third-straight victory.

New York took its first lead in the game late in the fourth quarter as Saquon Barkley scored the go-ahead touchdown with 1:43 left to play. This was the fourth game-winning drive of the year for quarterback Daniel Jones. The Giants only totaled 238 yards of offense in today’s matchup, but it was still enough to earn the victory.

Saquon Barkley led the way for the New York Giants’ offense again. He totaled 83 rushing yards on 22 carries along with a game-winning one-yard rushing touchdown. The Giants’ offense never generated a play from scrimmage longer than 18-yards, yet still managed to put points on the board and secure the win. Daniel Jones tossed two touchdown passes along with his 173 yards in the win.

Rookie wide receiver Wan’Dale Robinson returned to the lineup after missing the last five weeks with an injury. In his comeback game, Robinson scored his first career touchdown as he hauled in three receptions for 37 yards. Rookie tight end Daniel Bellinger turned in another stellar performance, scoring his third touchdown on the year as he led the Giants’ offense with five receptions for 38 receiving yards.

The New York Giants’ defense played with a bend-don’t-break mentality to slow down the Baltimore Ravens and secure another huge win. The Giants’ defense forced two turnovers out of Lamar Jackson in the fourth quarter. Safety Julian Love picked off Jackson, leading to Saquon Barkley’s go-ahead touchdown. Rookie pass-rusher Kayvon Thibodeaux forced the other turnover, strip-sacking Lamar Jackson on the Ravens’ final possession to seal the win for Big Blue.

The Giants won the turnover battle, time of possession battle, and ultimately the game. They played clean, winning football to improve their record to 5-1. This hard-fought battle proves that the New York Giants are legitimate contenders, rather than pretenders, and are ready to make a run this season.