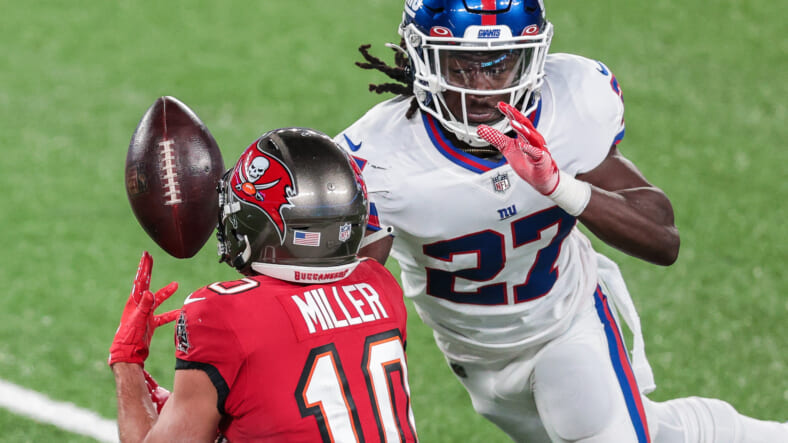 The New York Giants have been moving on from players to save cost this offseason, but at least one player is going to take less money as a willing measure. That player is the one that spent much of the year as the number two corner, Isaac Yiadom.

Yiadom joined the Giants in 2020 after a trade with the Broncos and was mainly brought on due to the Giants cutting DeAndre Baker in the offseason. That ended up being something of a mistake, as Baker was cleared of wrongdoing in the offseason drama he was wrapped up in. But the Giants had already made their choice, and were left without a reliable second cornerback.

Interesting contract tweak: CB Isaac Yiadom took a pay cut, per source. Yiadom was due to have a $2.183M cap hit (no guarantees). His new one-year deal is for $1.07M with $100K guaranteed. Yiadom loses $1.1M but the lower cap hit increases his odds of making the roster.

Yiadom was never the long term option at the spot and now that the Giants are heading into the draft as well as adding Adoree’ Jackson into the mix, it looks like something had to change to keep him on the roster. That change came in the form of restructuring his deal, after the Giants spent up much of their cap space in the free agent spending spree that brought Jackson and others to East Rutherford.

He’ll miss out on about $1M in profits thanks to the restructuring, but has a better chance of avoiding getting cut.

While most didn’t think Yiadom would hold on to the CB2 spot long term, he does have potential as a backup and many will be happy to see him agree to stay with the Giants for less money. He was, after all, good enough to last the season after getting to the Giants while putting on some good moments in his role next to James Bradberry.