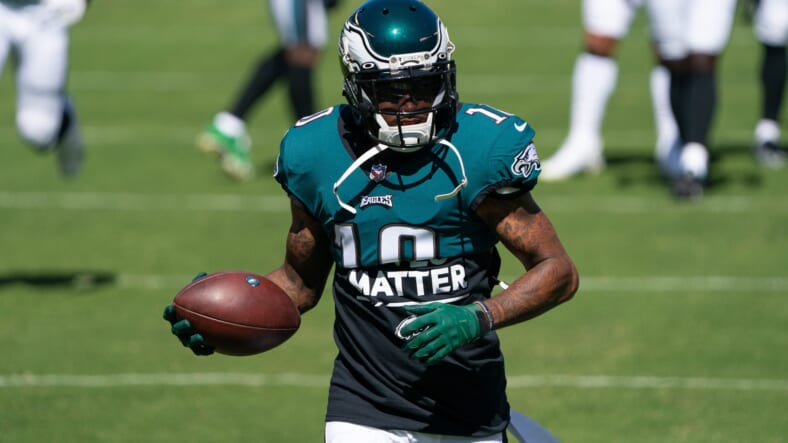 The New York Giants are right in the thick of it when it comes to the NFC East. Only one game out of first place, the Giants could use a division win against the Philadelphia Eagles on Thursday night. However, they are gaining back one of their more explosive playmakers, and one that has tortured the Giants over the past decade.

Some say he is the Giant-killer, otherwise known as DeSean Jackson. As one of the more polarizing receivers in the NFL, Jackson is in his 13th season in the NFL but has only managed to play three games so far this year. During those contests, he was targeted 20 times and caught seven receptions for 121 yards. In 2019, Jackson also missed the majority of the season, so it is safe to say he is not the same receiver as he once was.

Nonetheless, the Eagles are desperately thin at the wide receiver position, which makes Jackson a focal point for them against the Giants this week.

#Eagles' HC Doug Pederson said he anticipates WR DeSean Jackson playing on Thursday Night vs. the #Giants. He hasn't played since Week 3 with a hamstring injury. Still doesn't sound like Alshon Jeffrey (foot) will be making his season-debut.

Luckily for Big Blue, they have one of the best cornerbacks in the NFL to ensure Jackson doesnâ€™t get going.

James Bradberry, who currently hosts an 83.7 overall grade with an 84.4 coverage grade, has completely dominated this year. A former second-round selection, Bradberry has 20 combined tackles, 10 passes defended, and two interceptions on the year. Last week against the Washington Football Team, he allowed just three receptions for 19 yards, picking up an interception along the way. His influence on defense has been beautifully orchestrated by coordinator Patrick Graham, who is in his first year with the Giants.

This guy is special right here — check this:

His entire job here is to read the QBs eyes and drift into the secondary, he does that to PERFECTION and walks away with an interception.

What Patrick Graham is doing with him is borderline genius. pic.twitter.com/3IDUTkcNI1

How will the New York Giants use their best corner?

I donâ€™t believe that he will scheme Bradberry against Jackson in a shadow concept, but rather allow him to take away an entire section of the field, covering over the top to ensure the speedy wideout doesnâ€™t get loose in the secondary.

In recent years, the Giantsâ€™ defense has been quite mercurial, and considering the improvement, they made this year, I think they have a good chance of pestering the Philadelphia offense.