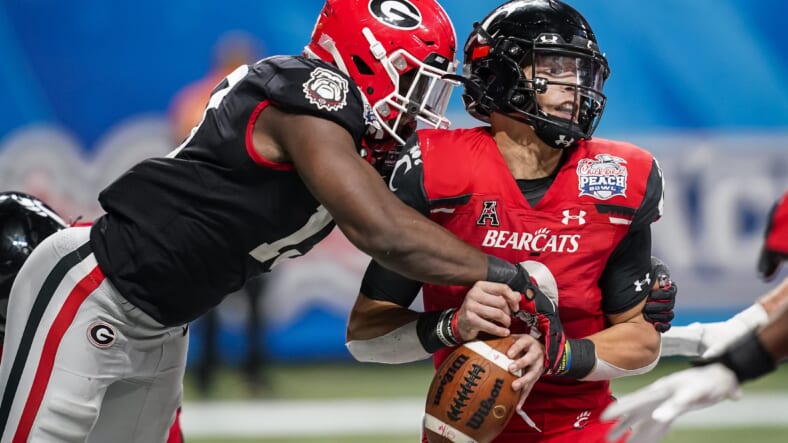 The rest of the NFL may have messed up by allowing New York Giants draft pick Azeez Ojulari to fall all the way to the 50th selection where the Giants took him. Ojulari was predicted originally to be a high first round pick, and was even mocked to the Giants with the 11th selection by some names in the draft analysis community.

However, due to late news that came out about a potential knee problem, Ojulari fell and the Giants were able to get the player for what looks like far less than his true value.

The Giants organization is confident that the knee story isn’t accurate, and that they’re getting a healthy player with Ojulari. Many media members around the league have been bullish so far in their predictions about Ojulari’s performance, estimating him to perform like the upper first round player that he was projected as.

The latest of those predictions is from NFL.com’s Lance Zierlein and has Ojulari as one of the candidates for the Defensive Rookie of the Year award. While Ojulari only comes in at 9th on the list, it’s impressive to get that kind of acknowledgement at all after falling significantly and being drafted in the second round.

The Giants had way too much rush production come from their big men up front — defensive tackle Leonard Williams, who had 11.5 sacks, was the only player toÂ post more than four last season — so they’re hoping Ojulari can give their attack more life off the edge. The tape can be a little uneven at times, but his flashes are really eye-catching. Georgia did so much rotating along their defensive front that I didn’t always feel like he was able to get into a groove. He’ll be on the field full-time for the Giants, and if the coaches can cultivate those flashes into a skilled rush, Ojulari will be a legitimate contender out of this group.

If Ojulari does perform like this, he’ll definitely go down as one of the better draft picks under Dave Gettleman. And the Giants are especially lucky that Ojulari fell to this spot, as the pick also addresses a major area of need.

Note that the article doesn’t mention the injury concerns that led to Ojulari falling in the first place. Those have, for the most part, fallen by the wayside more recently.

With the way those injury concerns have completely fallen out of discussion, and the Giants organization hasn’t found anything wrong with Ojulari yet, it’s safe to say his fall from first round prospect may very well happened because of misplaced and ill-informed rumors leading up to the draft rather than anything with merit.