New York Giants: Azeez Ojulari might be the missing link on defense 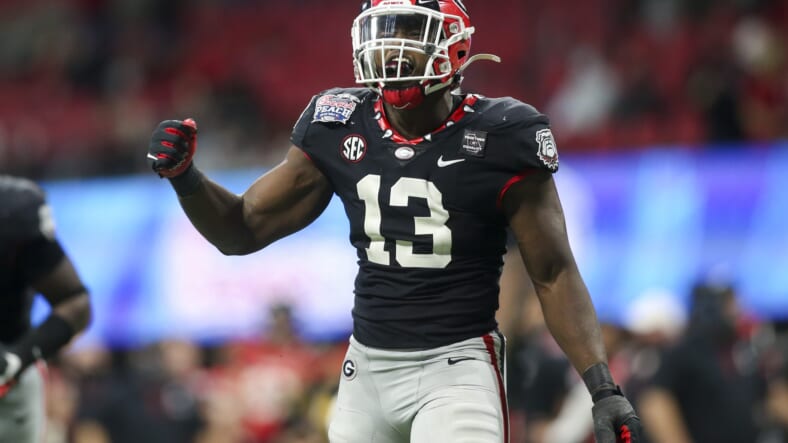 When the New York Giants traded back from 42 to 50th in the second round, nobody expected them to have a chance at Georgia stand out pass rusher Azeez Ojulari. However, the Giants managed to add a third-round pick in 2022 and land arguably the best pass rusher in this draft class.

It wasnâ€™t more than two weeks ago that Ojulari was being mocked to the Giants at 11 overall, and seeing him drop to 50 was an absolute blessing from the football gods and one the Giants cashed in on immediately. Last year, Ojulari posted 9.5 sacks, 12.5 tackle for a loss, and four forced fumbles, showcasing his vast array of attributes, ranging from speed to finesse on the edge.

Standing at 6’2″ and 249 pounds, Ojulari has great size for an outside linebacker, giving him bend around the edge but also agility in between the tackles. He already possesses NFL strength and explosiveness, and while he might be a bit underdeveloped against the run, Azeez is exactly what the Giants needed in terms of rushing the passer to take their defense to the next level.

Last season, the Giants defense earned 40 total tackles, which surprisingly ranked 12th in the NFL. Without Oshane Ximines and Lorenzo Carter, Big Blue deployed an outside linebacker unit composed of Carter Coughlin and Jabaal Sheard as the primary starters. The fact that those two even stood a chance against NFL-level talent was mind-blowing, as defensive coordinator Patrick Graham worked his magic.

A player like Ojulari could have a significant impact on the day, and Graham can do many different things with the Georgia stand out. Having great power with his chop moves and balance to absorb blocks and maintain his frame, the 20-year-old is just scratching the surface.

Some might even call this selection for the Giants the steal of the draft, simply based on the fact that he was projected as a first-round pick and dropped to the middle of the second round. Big Blue made some phenomenal moves to help themselves down the line in terms of adding draft capital but also provided immediate support in 2022.

One of the missing links for the Giants recently has been the presence of an established pass rusher, and Ojulari can provide that if he develops correctly.