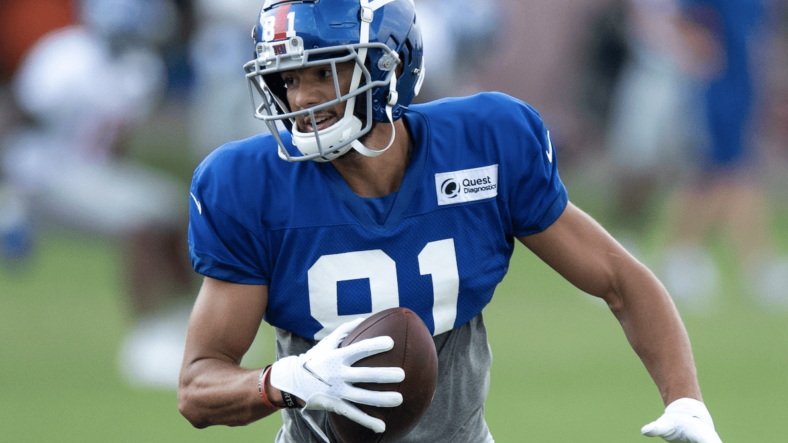 The New York Giants added another W to the win column today. New York swept Washington, beating the Football Team for the second time this season. The Giants’ stout defense forced five turnovers while the offense kept the ball out of harm’s way and managed a 23-20 victory.

With the offense’s sound performance came the emergence of a new playmaker for Daniel Jones. Undrafted free agent rookie wide receiver Austin Mack was impressive in his first game with expanded playing time.

Entering this game, Austin Mack had just one target, one reception, and one yard on the season. Mack was productive early and often during the Giants’ win over Washington. He got things started in the first quarter hauling in a deep shot down the sideline for a 51-yard gain, the longest passing play of the Giants’ season so far.

Mack finished the game with 4 receptions for 72 yards on 5 targets. He nearly scored a touchdown as well but was marked down just short of the end zone.

Austin Mack so an expanded role in the offense this week as the Giants made the decision to bench veteran wide receiver, Golden Tate. Tate has been vocally unhappy with his role in the Giants’ offense, but after Austin Mack’s impressive Week 9 performance, it does not seem like Tate’s role will expand anytime soon.

Austin Mack is a name many Giants fans became familiar with over the summer. The rookie was impressive during training camp and made his way onto the Giants’ practice squad. Mack’s impressive route running makes him standout amongst other rookies. After his solid performance today, Mack should see more time on the field this season.