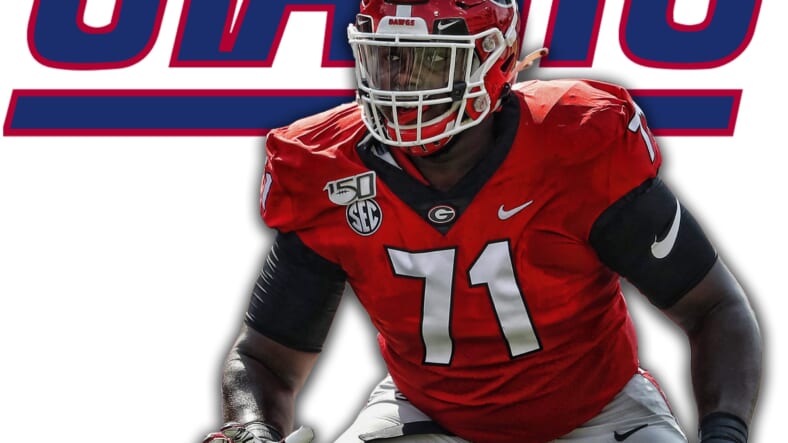 The New York Giants have agreed to terms with the fourth overall pick in the 2020 NFL Draft, offensive tackle Andrew Thomas. The Giants and Thomas areÂ in agreement on a four-year, fully guaranteed $32.345M contract with a $21.1M signing bonus, according to Ian Rapoport.

Andrew Thomas, the three-year starter out of Georgia,Â is the fourth top-five pick to get his deal done. Thomas will take a physical today then sign the contract.

The New York Giants desperately needed an upgrade at offensive tackle this offseason. Last season, the Giants’ starting offensive tackles allowed a combined 96 pressures. Nate Solder accounted for 56 of those pressures and also allowed 11 sacks on the season. Andrew Thomas is now in a contractual agreement to be the Giants’ left tackle of the future.

Andrew Thomas played 1,075 pass-block snaps in his collegiate career. On those snaps, Thomas allowed only 37 total pressures. He also has not allowed more than 2 pressures in a game since 2017 (his freshman season at right tackle).

The Giants report to training camp tomorrow. New York is working to get its entire rookie draft class under contract. Sixth-round pick Cam Brown signed his rookie contract earlier today. Seventh-round pick Tae Crowder has also signed.Â TJ Brunson, Matt Peart, and Darnay Holmes have also agreed to terms with the Giants. There are only a few rookies left for the Giants to sign, including second-round pick Xavier McKinney. Expect to see the Giants complete these deals with their rookies very soon.