New York Giants: An inside look at why Tiki Barber retired from the NFL 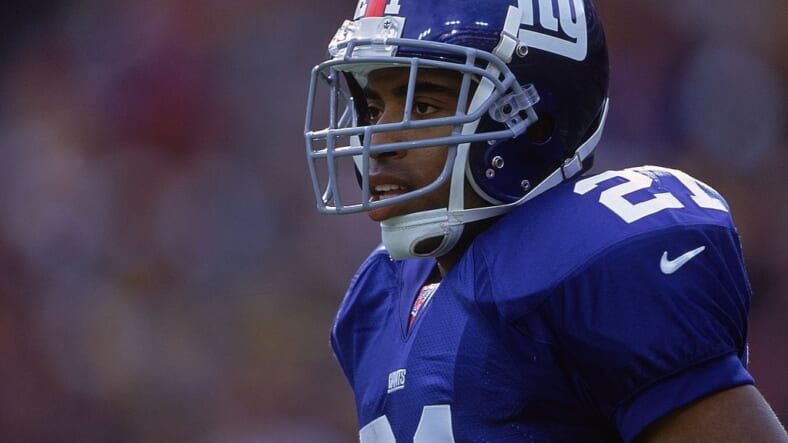 3 Dec 2000: A close up of Tiki Barber #21 of the New York Giants as he looks on from the field during the game against the Washington Redskins at the FedEx Field in Landover, Maryland. The Giants defeated the Redskins 9-7.Mandatory Credit: Jamie Squire /Allsport

Former New York Giants running back Tiki Barber enjoyed 10 years in the NFL, missing only a handful of games. Ultimately, health was/is extremely important to him, and he played in all 16 games for the final five years of his tenure in the NFL. He missed six total games in his entire career, amassing 10,449 yards, and 55 total touchdowns. He was a Pro Bowler between 2004 and 2006, even earning first-team All-Pro accolades during the 2005 campaign. However, he retired prematurely due to health concerns and multiple factors weighing on his mind.

His head coach of the time, Tom Coughlin, was an extremely disciplined leader and oftentimes underappreciated some of the players on the roster, according to Barber.

â€œI mean, Tom was such a small part of it,â€ Barber said during an appearance on the Scoop B Radio Podcast. â€œHe was so hard on everybody and you felt unappreciated at times, but it was so much more than that. Maybe he was the last little straw that made me walk away from the game, but physically I was getting beat up, man.

â€œIt would take me until Thursday to feel good again. I was getting massages on Monday and acupuncture. I would get this ART treatment and then another massage on Thursday, and then now Iâ€™m feeling all right on Friday. [Then weâ€™d have] like a walkthrough practice and then you get beat up again and it starts over. And it was just getting hard.â€

Going through the physical toll of a running back in the early 2000s must have been grueling, and it forced barber into retirement and a role with Fox News. He began to find the political side of things more interesting and intriguing in his life, and it took the physical toll of being beaten up every week out of the picture. However, the game always finds a way to get back into your life, as he began to file papers to return to the NFL in 2011, five years after his initial retirement.

His return never materialized, but Barber played an essential role in Giants’ history. Heâ€™s one of the all-time great running backs for the team and in the NFL. While he might fault Coughlin for his retirement to a degree, he must give him credit for helping solve his fumbling issues early on in his career.