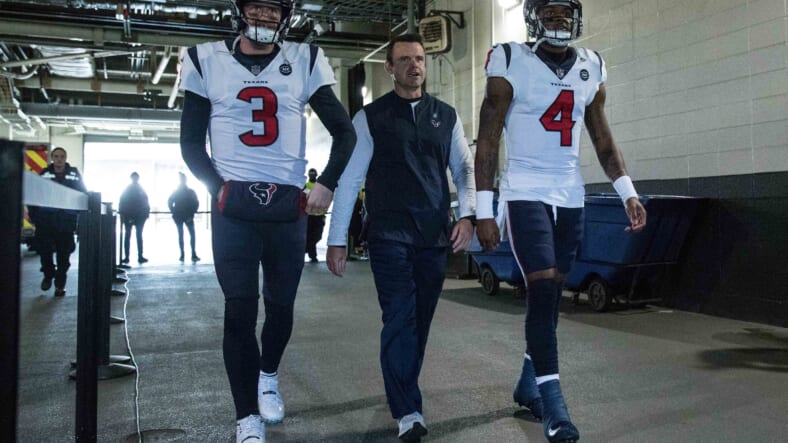 Houston Texans quarterback Deshaun Watson will be on the move this offseason, but not to the New York Giants. The team is priced out of a deal for him thanks to the high demands of the Texans. And while those demands seem to be a rumor so far, there’s no way the Giants can make a deal happen if they’re true.

The Rams-Lions trade will have nothing to do with a Watson trade if the Texans do it. They'll want 2 ones, 2 twos and 2 young defensive starters, at the least. Watson, 25, under contract, great QB, team leader, beloved by fans, pillar of the community. Start with the Jets.

We’ve seen some trade ideas that would send Watson to the Giants, from ones that could actually happen to those that seem to be from the realm of fantasy. But these demands look impossible for the Giants to fill, even moreso than some of the wild ideas such as sending three first round picks and Saquon Barkley to the Texans.

Many teams will be ruled out by the Texans’ demands

The Texans wanting two first round picks and two second round ones is already enough to scare off many teams, but two young defensive starters may just rule out most of the suitors for Watson. It should especially rule out the Giants, who don’t have the kind of depth to just ship off two young starters on defense as well as draft picks that will have a big impact on the future of their team.

It looks like the Jets might be in the market for Watson given these criteria. The Jets have less room to fall compared to the Giants, who have started to turn things around after hiring Joe Judge. Giving up talent wouldn’t hurt them as much. However, a rebuilding team like the Jets may also be scared off by the draft pick requirement. Those picks will likely play a big role in their future plans, after all.

At the end of the day, it’s easy to see why the Texans want so much for Watson – but don’t be shocked if no one takes the deal.