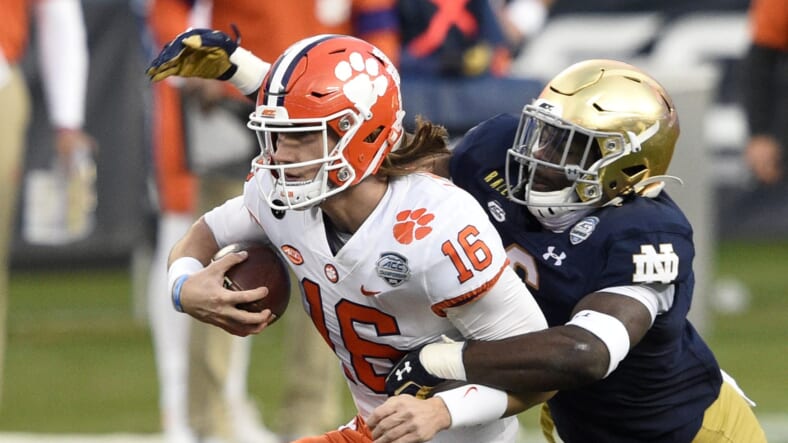 The New York Giants have a clear avenue toward selecting an elite prospect in the 2021 NFL draft. With potentially five quarterbacks going in the top 10 picks, thereâ€™s no question a premium talent will be available at 11, and the Giants could elect to bolster either side of the football with an instant playmaker. Whether it be a premium receiver or a defensive weapon like Micah Parsons, they will find themselves in a position of benefit later on in April.

Co-owner John Mara said it best during his press conference on Wednesday afternoon, indicating that the Giants donâ€™t need to sit tight and select a receiver or cornerback after the signings of Kenny Golladay and Adoree Jackson. Instead, they have the ability to go best player available, instead of selecting for need with the 11th overall pick.

Nonetheless, a recent ESPN mock draft devised by Todd McShay has the Giants doing the unthinkable.

I’m not sure the Patriots would jump into the top 10 for a QB, but hopping four spots for one is very much a possibility. The Giants could certainly stay put and draftÂ Penei Sewell, but they could also be looking at defense — which means a slide back makes some sense. And for their troubles, the Patriots would likely send them something in the ballpark of a third-rounder this year (No. 96) and either a second- or third-rounder in 2022.

In theory, the decision to trade back makes a ton of sense, but not when Justin Fields, Micah Parsons, Penei Sewell, and Rashawn Slater are all available. If the Patriots are willing to trade up to grab their quarterback in Fields, the Giants could likely gain more than a third-round pick this year and a second or third in 2022.

Aside from the lackluster return in value, the Giants pass over a potentially generational OL talent in Sewell, a position they desperately need to upgrade and one of incredible value, and select a linebacker to bolster a defense that already has top-10 if not better aspirations.

The reality is simple, the Giants have more pressing needs than a linebacker, and while I love Jeremiah Owusu-Koramoah, not only is Sewell the best player available at 11, but he also solves a major position of need with a rookie lineman with All-Pro potential.

Nonetheless, this mock draft is extremely optimistic, given several potential top-five players drop to the 11th pick and continue to free fall. Minnesota standout WR Rashod Bateman slips all the way to 37 here, itâ€™s quite absurd.