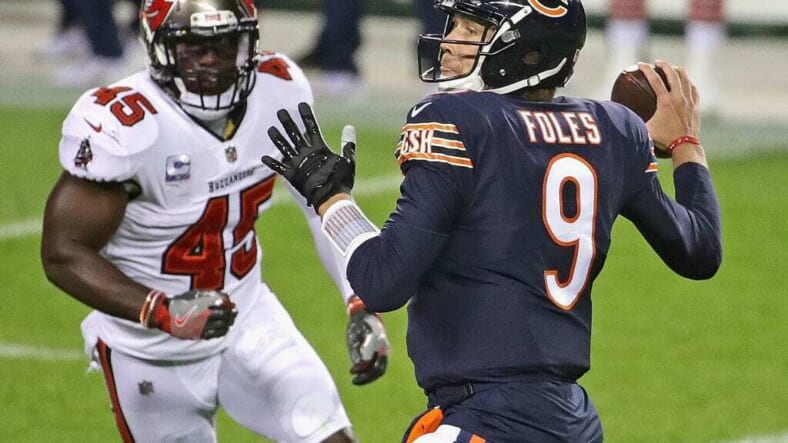 CHICAGO, ILLINOIS - OCTOBER 08: Nick Foles #9 of the Chicago Bears passes under pressure from Devin White #45 of the Tampa Bay Buccaneers at Soldier Field on October 08, 2020 in Chicago, Illinois. The Bears defeated the Bucs 20-19. (Photo by Jonathan Daniel/Getty Images)

The Buccaneers are red hot and have established themselves as a legitimate Super Bowl contender in recent weeks. Tampa Bay’s offense has exploded with Tom Brady playing at an MVP level. But the true key to the Bucs’ success is their fearsome defense.

The heart and soul of Tampa Bay’s defense lines up right in the middle of the formation. Long-time starting inside linebacker Lavonte David has been his usual dominant self. But now, a new force to be reckoned with has emerged beside David. Second-year linebacker Devin White is a rising star that the Giants need to keep an eye on this Monday.

Lavonte David has been the face of the Buccaneers’ defense for years. This year he has been excellent as usual. Lavonte has already racked up 55 combined tackles through 7 games. He has also forced two turnovers, one fumble and one interception. David is as consistent as it gets at the inside linebacker position. But the Buccaneers’ defense has truly benefited from the emergence of David’s inside linebacker companion.

White has freakish athletic ability. He ran an insane 4.42s 40-yard dash (99th percentile) at the 2019 NFL Scouting Combine combined with a 39.5-inch vertical leap (98th percentile). He is an explosive young defender that flies around the field making plays.

When the Giants take on the Buccaneers on Monday, they will be facing up against the NFL’s Week 7 Defensive Player of the Week in Devin White. Devin totaled 11 combined tackles and 3 sacks against the Las Vegas Raiders in Tampa Bay’s blowout victory.

Facing off against Lavonte David and Devin White is no easy task for any NFL offense. The New York Giants will need to come up with a clever offensive gameplan to prevent the Tampa Bay Buccaneers’ linebackers from suffocating the Giants’ offense in Week 8.