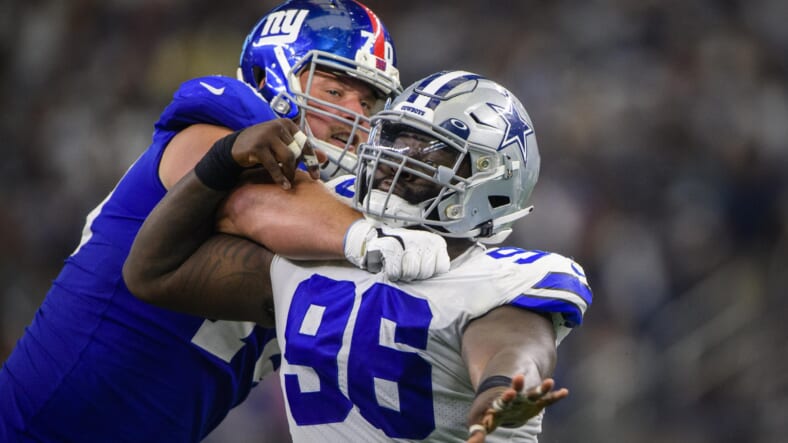 The New York Giants will have to get creative this off-season to make the necessary moves to improve their team, but one thing they canâ€™t afford to do is hurt their offensive line. As arguably the weakest unit on the team, the OL ranked 32nd in the NFL in pass-blocking efficiency in 2020 and taking away their best player would only doom quarterback Daniel Jones even more.

According to CBS, the Giants are reportedly shopping RG Kevin Zeitler, who is their best OL, and his loss would significantly hurt Jonesâ€™ development. With DJ entering his third season, he has yet to experience ample time in the pocket and playmakers to utilize, which is extremely disappointing considering the Giants believe heâ€™s capable of being their franchise quarterback.

When it comes to Zeitler, retaining him would include a $14.5 million cap hit in 2021, but cutting him would save the team $12.5 million to utilize. Theoretically, they could save the money and reallocate toward a lesser player to fill the RG position temporarily, but again, it would put their quarterback in harm’s way.

Zeitler is historically an above-average lineman but had a down year in 2020 due to inadequate support on both sides. Nick Gates was a first-year center and took a majority of the season to learn the ropes, and Cam Fleming was a journeyman right tackle that struggled consistently.

If the Giants do let Kevin walk, they will have to find an adequate supplement, which is easier said than done.

If they can get draft capital, great, but I would prefer they extend and lower cap hit if possible. The Giants are heading toward more OL hell problems if they cut him and don’t replace with quality.

In 2020, PFF graded Zeitler as the 23rd best pass protector among 74 eligible guards. For context Shane Lemieux landed at 74, indicating him starting in 2021 could be a massive liability. Zeitler ranked 30th overall in run-blocking and was the Giants’ highest-rated lineman in every category. Considering his health and efficiency in pass-pro, letting him walk would cause more harm than good.

He was an even better lineman in 2019 when he graded out as the 6th best guard with a minimum of 400 snaps.

What can the New York Giants do to creatively extract value from Zeitler moving forward?

Extending him for two more years would allow financial officer Kevin Abrams to spread his cap hit over the next two seasons and lower his dead money. This would allow them to move on without consuming too much dead cap but also reducing his overall cap hit per season.

Ideally, they would tear up the final year of his contract and offer him a brand new deal that would have an escalating cap hit over the next three years with reduced dead money. A higher signing bonus would lower the cap hit tremendously in 2021 but would be spread out over the three seasons and would be guaranteed. In this scenario, they can wait for the NFL Cap to increase and trade Zeitler for draft capital in the future – which would essentially be buying a draft pick with his signing bonus since that money is still guaranteed by the Giants and will be on the hook until his contract expires.

The Giants will need to get creative here, but there are ways they can restructure his deal and ensure they don’t torch their OL in the process.