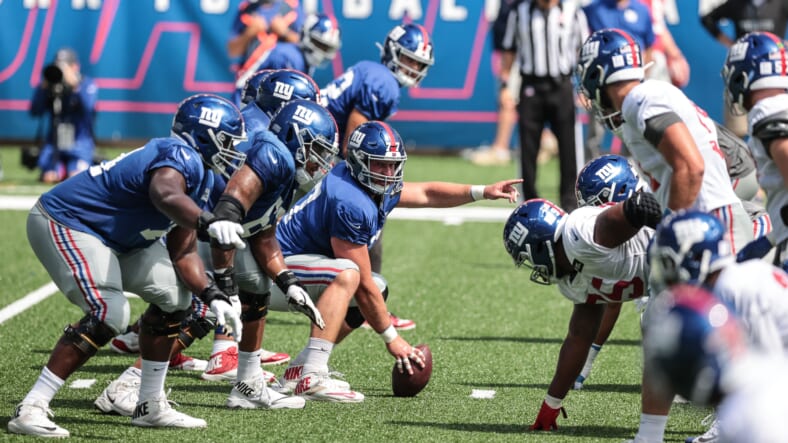 With the NFL 53-man roster deadline set for 4 PM on Saturday, changes will be made across the league to trim the roster down. Empire Sports Media has you covered with all of the New York Giants’ cuts leading up to the deadline.

For a look at our projected 53-man roster, check it out here!

The former XFL standout had a solid camp but simply cannot contribute at the cornerback position in a starting way. An unfortunate release but one that most saw coming.

The Giants needed to trim their offensive line numbers and Eric Smith was always a cut candidate. It’s possible he lands on the practice squad as depth.

A late addition to the roster, he didn’t do enough to impress in limited time.

Slotted in behind RJ McIntosh, Slayton was always the odd-man-out.

There simply wasn’t enough room on the roster for Dickerson after the Giants signed Levin Toilolo this offseason.

The reserve corner never was able to find his footing in coverage but was solid against the run. I believe the Giants will add him to the PS if he clears waivers.

Smith was always a long-shot to make the roster, but as a UDFA corner, he could be a high upside option who earns a spot on the practice squad.

The Giants have several QBs on the roster, including Daniel Jones, Colt McCoy, and Cooper Rush, Tanney’s time in blue was inevitably coming to an end.

As an undrafted free agent, Lalo had a tall mountain to climb to gain a roster spot, there’s a potential for practice squad landing.

Tinker was signed this week to come in and provide some last-second competition alongside Casey Kreiter, but the former Bronco held down the fort.

Mack had a solid camp coming out of Ohio State but the WR room is simply too crowded. He’s a big practice squad candidate.

A last-second add before Thursday’s scrimmage, Feaster was always a long-shot to make the roster.

This is a strange one. Connelly looked great last season in a small sample size, but the Giants must have seen a vast regression after tearing his ACL against Washington.

Holton was signed as a potential replacement for gunner Cody Core, but his release tells us all we need to know.

Rush was claimed on waivers from the Cowboys, and knowing Garrett’s system was a plus. Unfortunately, he was the odd man out. The Giants will stick with two QBs.

One of the Giants’ 7th round picks, he must have looked spotty to not earn a roster spot. Ultimately, one of the four seventh-rounders was going to receive the ax.

Bachman made a serious push for a roster spot, but there simply wasn’t enough room for him.