New York Giants: 3 Round Mock Draft – The Defense Gets Their ‘Men’ 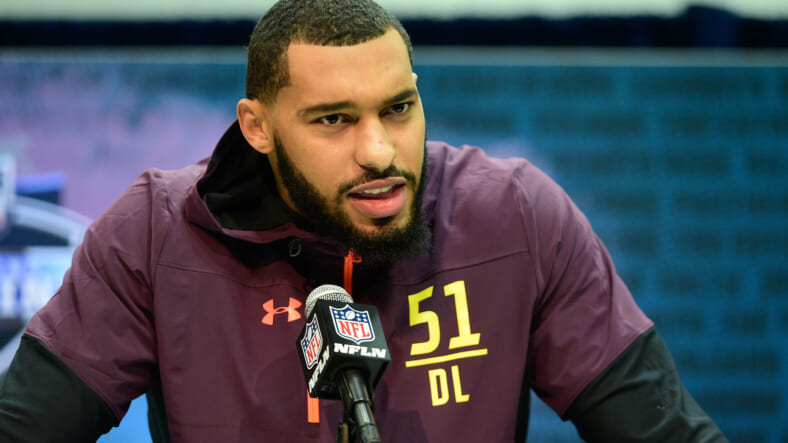 The New York Giants have spent plenty of capital on the offense in an attempt to salvage what’s left of quarterback Eli Manning’s career, while also planning for the future after his departure. General manager Dave Gettleman made it a priority to address the offensive line first and foremost, bringing Nate Solder, Will Hernandez, and now Kevin Zeitler to New York.

The trading of Odell Beckham Jr. surely leaves a hole in the receiving corps, but having Saquon Barkley and signing Golden Tate should compensate to a degree. After all, the Giants did score the most points in week 13 of the 2018 season when Beckham was out with a groin injury.

While the offense has been well taken care of, the defense is still a work in progress with inexperience at multiple positions. The Giants need to begin funding the growth of this unit, and I expect them to in the draft ahead.

With the 37th pick in the draft, the Giants elect to address their offensive line with tackle Dalton Risner. The Kansas State product is a huge admirer of left tackle Nate Solder, stating:

Adding a player like Risner would complete the overhaul of the offensive line, and having two young players is only a bonus – Risner and Hernandez.

Risner is a born leader, and he plans to take advantage of that skill from the very beginning. While he’s not a top-tier athlete, his fundamentals are clean and pure. He mimics Solder, who prides himself on the correct technique and ensuring he does everything the right way so he can justify his performances. Now, most have Dalton as a second-round pick, and the Giants managed to grab a great lineman in a similar fashion last year, so this is a very realistic option for Big Blue.

With the Giants’ second first-rounder acquired in the Beckham trade, they elect to take a linebacker. Michigan’s Devin Bush fits the bill perfectly, as he adds talent to a group that lacks a true secondary starter behind Alec Ogletree.

Bush is a sideline-to-sideline linebacker with great speed and athleticism. In 2018, he racked up 66 total tackles with 8.5 for a loss. He’s essentially a poor man’s Devin White, but he still offers immense value at No. 17.

One of the more underrated aspects of his game is his ability to cover, which has been an issue for the Giants at the linebacker position. Having a player in the middle of the field that can pick up an opposing tight end is huge, especially when it’s an LB and doesn’t require a safety. Additionally, flanking running backs are his specialty in coverage and coming out of the backfield.

This would be a huge value pick for the Giants and it would add another dimension to their defense immediately.

The Giants are in dire need of a top edge rusher, which is why they go with Montez Sweat at No. 6. His size and speed combination offers bountiful potential and the ability to immediately upgrade the Giants’ defensive line.

Sweat would essentially act as an outside linebacker in James Bettcher’s system, which could be perfect for him as his length would allow him to expose the outside foot of opposing tackles.

A pass-rusher with 4.41 speed is not normal – to put that into perspective, he ran .3 seconds faster than Saquon Barkley in the 40-yard-dash.

One of the most appealing factors in regard to Sweat is his ability to grow into his frame even more. At 6’6″, 260-pounds, we are already talking about a monster of a human, and to add even more to his frame would make him virtually prototypical.