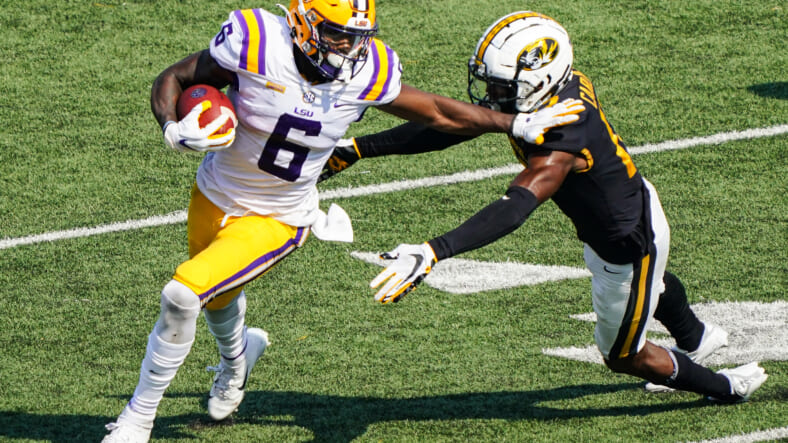 The New York Giants have many different avenues they can take in the 2021 NFL draft, especially with teams moving around them on Friday afternoon. With the Philadelphia Eagles moving out of the top 10 just behind the Giants at 12, thereâ€™s one less competitor for a premium non-quarterback. The Giants will have their shot at an instant playmaker, whether it be on the offensive line or a defender like MicahParsons.

Considering their adequate free agency, where they landed a WR1 in Kenny Golladay and a CB2 in Adoree Jackson, it could set them up to go best player available, but letâ€™s take a look at how they can kill two birds with one stone.

Many have predicted that Northwestern offensive tackle Rashawn Slater will end up with the Giants at 11. That would be a pretty decent snag since heâ€™s an instant starter at either right tackle or right guard. Analysts have Slater projected as filling every position on the OL for a given team with his versatility and elite athleticism. Slater has a mean streak and is extremely flexible with where he can feature on an NFL OL. If the Giants want to bolster their OL and give Daniel Jones more time in the pocket to utilize his new playmakers, drafting Slater would be a great move.

He has the potential to become a perennial Pro Bowl and potential All-Pro player, and solving a weekend position with a player of his magnitude in the first round would be incredible. Some even have him ahead of Penei Sewell from Oregon.

One wide receiver who isnâ€™t getting enough attention is LSU standout, Terrace Marshall. He was buried behind Jaâ€™Marr Chase and Justin Jefferson over the past few years, but at 20 years old, Terrace has incredible fundamentals and size. At 6â€™3â€ and 200 pounds, Marshall is only 20 years old, two years younger than DeVonta Smith and Jaylen Waddle. In just seven games last season, he averaged more than 100 yards per game and landed double-digit touchdown receptions.

Is he one of the most underrated prospects in the Draft?pic.twitter.com/Mk0ENIyrPg

Not only can he feature as an â€œXâ€ receiver on the outside, but he has the technical refinement to move interior to slot as well. As a taller receiver, heâ€™d be a fantastic option for Daniel Jones in the passing game and a long-term solution since the Giants have an out in Sterling Shepardâ€™s deal after the 2021 season. Marshall has the potential to become a WR1 in the future, and at his age, heâ€™s just barely scratching the surface.

Joseph Ossai is the definition of clutch.

SACK FOR THE WIN! @TexasFootball's @joseph_ossai sacks Sanders to give the Longhorns the win in Stillwater ?? pic.twitter.com/C1UAZpteWy

Making several game-winning plays in 2020, Ossai would be a solid pick up for the Giants at 76. I donâ€™t believe he will fall that far, but he did earn 5.5 sacks, 15.5 tackles for loss, and three forced fumbles in 2020. His story is inspiring, moving from Nigeria at a young age in a lottery pick and taking up football, eventually landing himself a big gig with Texas. I believe he would be a fantastic fit for the Giants at OLB â€” another 3rd round pick spend on the position. The Giants need as much competition as they can get with the return of Lorenzo Carter and Oshane Ximines from season-ending injuries.

Relying on them is a bit optimistic, and adding a player of Ossaiâ€™s talent would be fantastic. At 6â€™4â€ and 253 pounds, Joseph has functional strength and great athleticism, something coordinator Patrick Graham can work with in terms of versatility.