New York Giants: 3 rookies that will fight for a roster spot in 2020 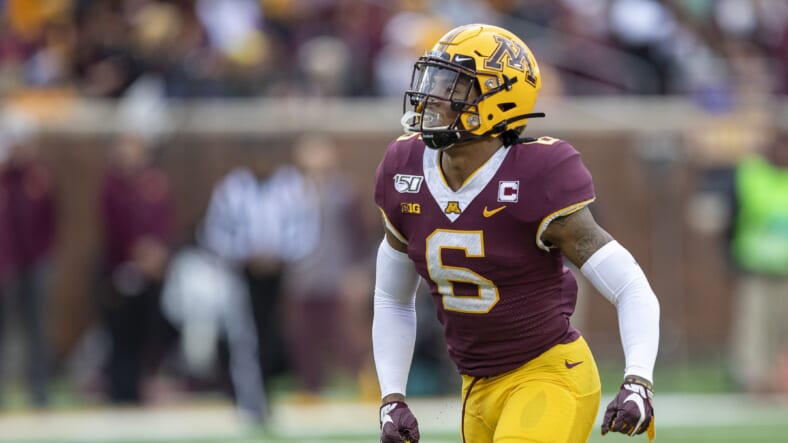 Taking a look at three New York Giants rookie who will be fighting for a spot on the roster this season:

When most believed that the Giants would package some of their seventh-round picks together to move up in the 2020 NFL draft, management saw it as an opportunity to add multiple bodies to compete for active roster spots. General manager Dave Gettleman and head coach Joe Judge stood pat in the seventh round, selecting all four picks and adding several high-upside players in the process.

All four have starting experience and upside, but some are more developmental than others.

Here are three rookies who will battle for roster spots this upcoming season:

Brunson isnâ€™t the most athletic prospect in the draft, but he was a team captain and was voted one of the most valuable players in 2018. He led the team with 106 tackles, four sacks, and 10.5 for a loss. Heâ€™s a tough inside linebacker who shows minimal fundamentals and short-area quickness. He has the size at 6-foot-1 and 230 pounds to plug running lanes and anchor down, but he struggles in following the right angles and covering ground quickly.

I imagine he will compete for an active roster spot, but would likely land on the practice squad for the Giants. It is clear that the coaching staff did not like their depth at the linebacker position and decided to allocate late-round picks to find a few supplemental pieces hopefully. Brunson can be one of those players, but he needs to improve his fundamentals and play with more tenacity.

Williamson is a player who has the coverage abilities but severely lacks tackling fundamentals. He is extremely aggressive and feisty in the slot, a position where the Giants have struggled in recent years.

If he can solve his tackling issues, Williamson can compete with Darnat Holmes, Julian Love, and Grant Haley in the interior. He is strong off the break and has the athleticism to match up with speedy slot receivers. His athletic profile gives him the high upside Gettleman and Judge were looking for. However, he is not the best anticipator and has lackluster ball skills.

Crowder was the final pick in the 2020 NFL draft, a.k.a. Mr. Irrelevant. The Georgia product has a stocky frame and is built for attacking downhill, but he is bad in coverage and a bit conservative for an inside linebacker.

Crowder is a scheme-specific player and will likely fill-in on early downs to stop the run. He is purely a depth piece with some potential, but given his lack of ability to cover in space, he will be fighting for a roster spot this upcoming season. He is another grinder, though, as he was one of the final signees for the Georgia Bulldogs in 2015. His determination and mentality make him a positive contribution to the locker room. Still, his skill set is just too thin at this point to consider him more than a supplemental player.