New York Giants: 3 plug and play guards to target in the 2nd round 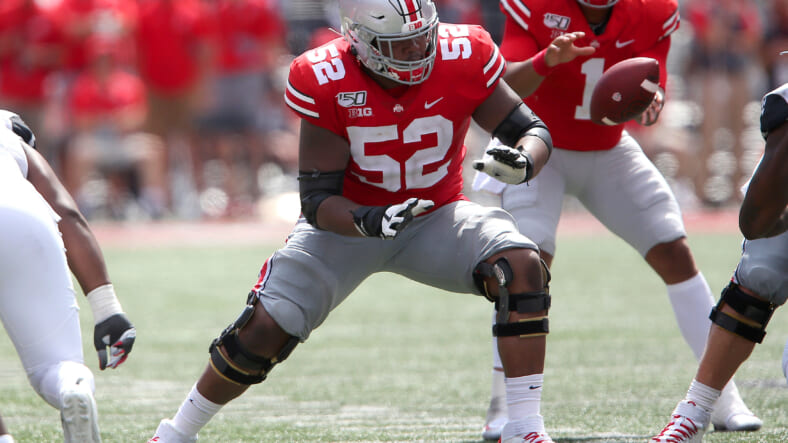 It doesnâ€™t matter how many offensive weapons Daniel Jones has if his protection on the offensive line is inadequate. The New York Giants still have a lot of work left to do to solve one of their biggest weaknesses, and after cutting their best lineman in Kevin Zeitler this off-season to free up money, they have to solve this hole in the NFL draft, whether it be in the first or second round.

While I believe the Giants will let the first round unfold in front of them, they could have an opportunity to select a premium lineman like Rashawn Slater or even Alijah Vera-Tucker. However, there are a few options in the second-round that could be plug-and-play starters on day one of the 2021 season.

While the drop-off is quite significant, these players have solid upside it might just like that elite talent that Slater and penne so will bring to the table. Not every starter in the NFL needs to be an All-Pro, though, as even an above-average player who slides under the Pro Bowl is still an adequate starter.

If you put it into perspective, Zeitler was easily the Giants’ best lineman and was nowhere near being a Pro-Bowl guard last season; we just need a young player to replicate his efficiency and hold down the right guard position. Now, it all depends on what type of value the Giants want to give up to solve the spot, and we know that Dave Gettleman had never drafted an OL in the first round prior to taking Andrew Thomas 4th overall last season.

Three iOL the New York Giants can target in the 2nd round:

The first option that makes a ton of sense for the Giants is Ohio State guard Wyatt Davis. Davis has pro comparisons to David DeCastro, as a strong and powerful interior lineman who excels on the strong side of the play. The Giants donâ€™t run a ton of counters, so if they are using a power gap scheme or outside zone, Davis should be adequate. As a powerful guard, he has a similar feel to Will Hernandez, operating in the trenches to create space for his running backs but also fend off pass rushers.

The problem with Davis is that he isnâ€™t the most agile lineman, which might be a problem for the Giants if they require their guards to pull across the line of scrimmage to hit the crack blocks. If that is the case, Davis might need a bit of refinement and time to adapt his game, but he has a solid player with upside at the NFL level.

Landon Dickerson is an interesting player, as he hosts a problematic injury history, including a torn ACL and multiple lower-body issues. Coming out of North Carolina, Dickerson was considered one of the top offensive tackle recruits before moving to the inside with Alabama. He was most recently invited to the Senior Bowl but did not participate due to injury, which is still a major concern. The problem with Dickerson, heâ€™s an incredibly talented player and a fantastic person, so despite the injuries, a team will take him in the second round, and he will be an adequate player when available.

He has a solid frame to hold it down in the interior and will easily make the transition to guard if the team wants to move him there. As a vocal leader and superior athlete, I believe he will have a successful career if he can remain healthy, and that might be a risk the Giants are willing to take.

Creed Humphrey is another option the Giants are likely considering, as a left-handed center coming out of Oklahoma. Humphrey is a 6’4″, 302-pound interior lineman, and one of the things I like about him the most is that he is another fantastic leader that diagnoses plays well the line of scrimmage. While Lance Zierlein of NFL.com doesnâ€™t believe heâ€™s a fantastic athlete, he has a high football IQ and is in the right place at the right time. Heâ€™s able to finish blocks and has a nasty streak, which is something the Giants prefer and their linemen.

While Humphrey might not be a star of the NFL level, he will be adequate and hold it down and run blocking and pass protection. Zierlein coins him a safe selection rather than a star player, but having three years of experience and two years as a team captain should convince an NFL team that heâ€™s capable of being a valuable player in the trenches.