New York Giants: 3 players who need to step up against Dallas 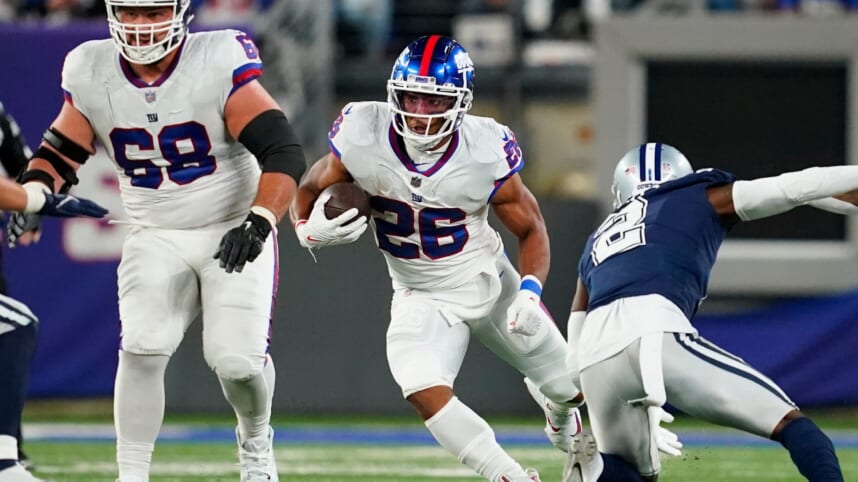 New York Giants running back Saquon Barkley (26) rushese against the Dallas Cowboys in the first half at MetLife Stadium on Monday, Sept. 26, 2022. Nfl Ny Giants Vs Dallas Cowboys Cowboys At Giants

The injury-riddled New York Giants are heading into a crucial matchup with the Dallas Cowboys on Thanksgiving. Big Blue is without four-fifths of their offensive line this week as injuries make them a 10-point underdog. Winning this second contest with the Cowboys is critical as the Giants are coming off of an embarrassing defeat at the hands of the Detroit Lions in Week 11. In Week 12, New York faces a mountain of challenges as they prepare to face the Cowboys. If the Giants want to win this game, they will need big performances out of the likes of Saquon Barkley, Tyre Phillips, and Kayvon Thibodeaux.

Saquon Barkley needs to step up against Dallas

Saquon Barkley is coming off his worst performance of the season, though. In Week 11, Barkley took 15 handoffs for only 22 yards. The Detroit Lions bottled Saquon up and earned an upset victory. Saquon Barkley needs to bounce back in Week 12 if the Giants want to beat Dallas on the road as underdogs.

The last time New York faced off against the Dallas Cowboys, the Giants lost 23-16. Saquon played a decent game, totaling 81 yards and 1 touchdown on 14 carries. But this time around, the Giants will be coming into this game on a short week, absolutely decimated with injuries. In particular, the Giants are challenged by injuries along the offensive line. It will not be easy for Saquon Barkley on Thursday, but he will need to will his way to victory for the New York Giants to upset the Dallas Cowboys.

Tyre Phillips has started for the New York Giants in each of their last three games with Evan Neal absent from the lineup. Neal was close to returning this week, but, ultimately, the 2022 first-round pick was ruled out of this week’s Thanksgiving matchup. Despite dealing with an injury this week, backup lineman Tyre Phillips will be staying in the starting lineup against a Dallas Cowboys team that had its way with the Giants’ offensive line in Week 3.

Daniel Jones was pressured on 55.1% of his drop backs vs Dallas in Week 3, per Nick Falato. The Giants’ offensive line gave up five sacks in the matchup as Demarcus Lawrence and company exposed some obvious weaknesses for Big Blue up front. Dallas is looking to repeat its pass-rushing success in Week 12. Tyre Phillips will be tasked with the arduous challenge of blocking Demarcus Lawrence on Thanksgiving. The Giants need a big game out of Tyre Phillips and the rest of the offensive line if they want to upset Dallas this week.

The fifth overall pick in the 2022 NFL Draft, Kayvon Thibodeaux, has quietly had an impressive rookie season for the New York Giants. But Giants fans and Thibodeaux alike are patiently waiting for that impression to longer be quiet, but to be loud, and readily apparent.

What better time for Kayvon to make a name for himself than Thanksgiving day with a division-rival matchup on national television? Dak Prescott has led the Dallas Cowboys to wins in each of his last nine starts against the New York Giants (NFL on CBS). Oftentimes, Prescott is unpressured and barely challenged when facing Big Blue. The Giants now have a difference-making pass-rusher on defense who they will need to rely on to disrupt Dak and will the team to victory.

Kayvon Thibodeaux was recently described as a “can opener” for the Giants’ defense by the unit’s coordinator, Wink Martindale. According to NFL Rookie Watch, Kayvon Thibodeaux has totaled 18 pressures this season in 7 games with a 12.6 pass rush win rate that leads all rookies, along with PFF’s highest rookie pass rusher grade. Thibodeaux has failed to stuff the stat sheet, though, totaling just 1 sack so far this season. But, as Martindale said, “the sacks will come,” and it is only a matter of time before Kayvon Thibodeaux puts together a breakout performance. With the Giants shorthanded against the Dallas Cowboys, this week now is the perfect time for Kayvon to have his breakout game.