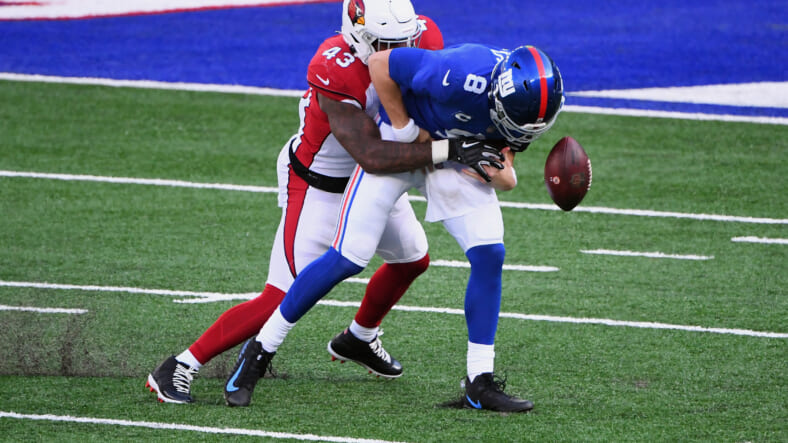 The New York Giants suffered significant injuries at the OLB position in 2020. Both starters Lorenzo Carter and Oshane Ximines suffered season-ending injuries, as Carter tore his Achilles against the Dallas Cowboys and Ximines suffered a shoulder injury which kept him out for a majority of the season. Coordinator Patrick Graham was forced to utilize reserve options, including late-round draft pick Carter Coughlin and practice squad pass rusher Jabaal Sheard.

While the Giantsâ€™ pass rush still managed to produce 40+ sacks, they lacked an elite presence on the outside to give more support to their interior defense. This off-season presents a solid opportunity for them to acquire a quality OLB they will upgrade the unit, especially with two of their starters coming off serious injuries.

However, with the lack of cap space, it will be difficult for them to allocate money toward the position, but letâ€™s take a look at several options that could fit the bill anyway.

One solid option is Haason Reddick of the Arizona Cardinals. Reddick made the transition to inside linebacker after spending his college career as a primary pass rusher at Temple. That experiment failed with Arizona, so they switched him back to OLB, where he picked up 12.5 sacks, and 16 QB hits this past season. In fact, he recorded five sacks against the Giants, setting a franchise record for Arizona.

Reddick is a quality player at just 26 years old and would present an immediate upgrade at OLB for the defense. He might be a bit more pricey than some lower-tier options, but coming off of a stellar season, he still wouldnâ€™t command premium money.

Another intriguing pass rusher is Leonard Floyd, who spent last year with the Los Angeles Rams after spending his first four seasons with the Chicago Bears. Heâ€™s played all 16 games in the last three seasons, earning 10.5 sacks, 19 QB hits, and 11 tackles for a loss last year.

He finally emerged as the pass rusher Chicago expected him to be when they drafted him back in 2016, but his elevation this past season with LA means heâ€™s just hitting his prime. Floyd likely wonâ€™t earn premium money either, so the Giants could probably land him for somewhere in the $12 million range per season.

This is a more cost-efficient option with upside. Jenkins is 6â€™3â€ and 259 OLB, whoâ€™s just 26 years old and coming off a down season with the New York Jets.

In 2019, he collected 8.0 sacks, and 13 QB hits, but given how suspect the Jets defense was in 2020, Jenkinsâ€™ production fell off because of it. This is a player I feel is vastly underrated and could prove to be a stellar acquisition for the Giants, considering how good their coaching staff is. With his upside and cost-efficient contract, this is a player I would seriously consider if I were GM Dave Gettleman and head coach Joe Judge.

Jenkins only earned $3.75 million last year, so the Giants could likely sign them for a similar price on a short-term deal.