New York Giants: 3 interior offensive lineman to target in round 4 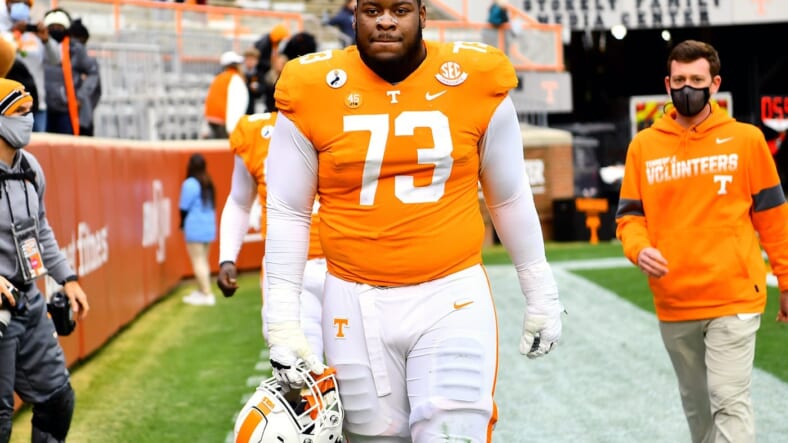 Tennessee offensive lineman Trey Smith (73) walks off the field for the final time after a SEC game between the Tennessee Volunteers and the Texas A&M Aggies held at Neyland Stadium in Knoxville, Tenn., on Saturday, December 19, 2020. Kns Vols Football Texas A M Bp

The New York Giants are taking a risky approach at right guard, as they cut Kevin Zeitler to save cash this off-season. They reallocated the money toward wide receiver Kenny Golladay, interior lineman Leonard Williams, and cornerback Adoree Jackson, but they didnâ€™t manage to solve the vacant RG spot they left behind.

Most believed the Giants would address the position in the first three rounds of the 2021 NFL draft, but instead, they elected to execute a few trade backs and add wide receiver Kadarius Toney, edge rusher Azeez Ojulari, and cornerback Aaron Robinson out of UCF.

A string of offensive guards were taken at the end of the third round, putting the Giants in a peculiar position. They need to find a starting-caliber player in the fourth round, as their next selections come in the sixth. General manager Dave Gettleman did state that there were two linemen who were targeted earlier in the draft, but both were taken before they reached the Giants. It is clear they feel a bit more confident they fans do about the interior of their offensive line, but they want to add more competition.

Letâ€™s take a look at a few remaining options that could fit the bill for Big Blue.

Three offensive linemen for the New York Giants to target in the 4th round:

One of the bigger names left on the board is Tennessee guard Trey Smith, who stands at 6’6″ and 321 pounds. Smith plays in a phone booth, utilizing below-average speed and above-average power to open up running lanes as an explosive blocker. He is a nasty player that fits the “hog mollie” role that Gettleman likes to find in the trenches. However, Smith is not the type of player you want if youâ€™re running a scheme with pulling guards and agile interior lineman; Smith will simply not be able to get into space properly.

Smith has also dealt with blood clots the past few years, another medical issue that could see him drop even further. If the Giants wanted to take a chance on him, he will be great in power and inside zone scheme, but anything requiring him to move might be a bit optimistic.

Another big boy is Deonte Brown from Alabama, who stands at 6’3″ and 344 pounds. Brown is a meatball who underwhelms with his mobility, similarly to Trey Smith. He takes up a lot of space in the interior, operating with incredible power from a standstill position. Again, heâ€™s another player that would fit a power scheme, but the Giants love their agile guards, which is the main reason that Shane Lemieux earned so much playing time last year.

Unless the Giants are thinking about shaking up their schematics, I donâ€™t believe Brown fits their mold quite well.

One player that stands out to me as a great option for the Giants is Jaylon Moore out of Western Michigan. Despite playing tackle in college, he projects as an interior lineman based on his below-average arm length. He is far more agile than Smith or Brown, distributing the Giants, a player who can drag across the line of scrimmage and offer more in that specific category. At 6’4″ and 311 pounds, Moore has excellent balance and moves well in pass protection. While the Giants donâ€™t have any connections to Western Michigan, heâ€™s a player that makes sense given his athletic attributes.