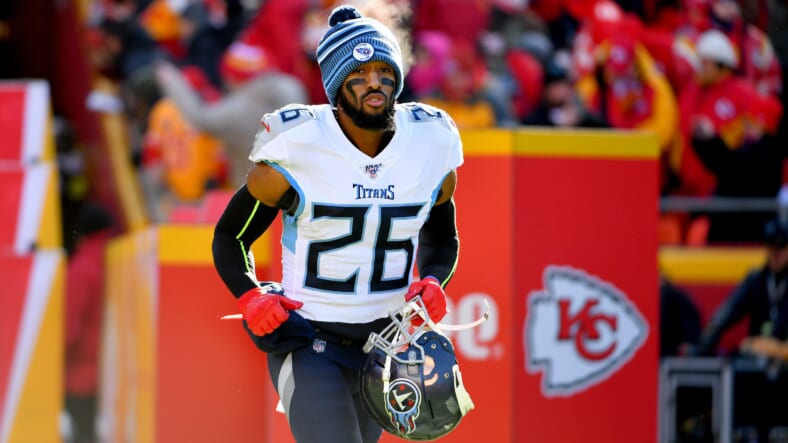 With the shocking news coming out that New York Giants‘ second-year corner DeAndre Baker, along with Seahawks cornerback Quinton Dunbar, was arrested and charged with four counts of armed robbery with a firearm and four counts of aggravated assault with a firearm stemming from a May 13th incident, Bakerâ€™s time with the Giants is almost certainly coming to an end.

This is obviously a huge blow to the team, as Baker was expected to build off of a promising finish to his rookie year and help stabilize the second cornerback spot opposite James Bradberry. The Giants now need to pivot immediately and assess both their internal and external options to replace Baker, whom they traded up to draft in 2019.

While the Giants have a number of other young defensive backs on the roster, it makes a lot of sense to add a veteran who doesnâ€™t need development and can fill in right away. Here are three veteran free agent options the Giants could bring in:

After it was initially thought that Logan Ryan would be signing with the Jets, it turns out that he remains a free agent. The Giants had expressed interest in Ryan prior to the Baker allegations, and that interest should only get stronger now with Baker most likely getting cut.

Ryan, 29, is still in the prime of his career and is coming off arguably his best season in 2019 as a member of the Titans. He finished the season with 113 total tackles, 4 interceptions, 4.5 sacks, and 4 forced fumbles while playing all 16 games. Heâ€™s been a good player throughout his career ever since he was selected in the third round by the Patriots back in 2013, tallying 367 career tackles, 8 forced fumbles, 11 sacks and 17 interceptions in 109 games and 85 starts. Judge is also familiar with him from their time together in New England.

Ryan plays his best in the slot but can be moved to the outside if necessary, so he fits the versatility component that the Giants want in their defense. With all the young guys in the secondary group, adding another established veteran to the mix would only help their development going forward. This is especially true for a guy like 2020 fourth-round pick Darnay Holmes, who is expected to become the slot corner of the future, so having him learn behind Ryan for a year or two would be great for him. Adding Ryan, who is from New Jersey and played his college ball at Rutgers, to the cornerback mix makes a lot of sense for a variety of reasons, and the Giants should be willing to pull the trigger now more than ever.

If the Giants are looking for another outside corner, then Dre Kirkpatrick is probably the best option available. The 2012 first-round pick from Alabama has had an unspectacular but solid career and could provide good competition for the number two spot Baker will be leaving behind. At the very least, he would serve as adequate depth.

In eight seasons with the Bengals, Kirkpatrick had 254 tackles, 10 interceptions, and 3 sacks in 99 games played with 67 starts. Last season was a rough one for Kirkpatrick, as he only played in 6 games before being placed on injured reserve with a hyperextended knee. In those 6 games, he put up 33 total tackles and 1 sack while failing to get an interception.

Kirkpatrickâ€™s best football might be behind him, but he still can be a contributor and hold his weight as a starter. And, like Ryan, he also has a connection with Judge through their time at Alabama. If the Giants want one of their other young guys to step up and take the starting spot, Kirkpatrick would be a good veteran piece to challenge them without stealing the job from them. If signing Ryan doesnâ€™t materialize, the Giants could certainly do worse than having Kirkpatrick as a fallback option.

The third option is a name you may have heard of before. Aqib Talib, 34, has been one of the more dominant corners over the past decade. While heâ€™s fallen off over the last couple of seasons and his best days are clearly a thing of the past, it may be worth it for the Giants to see if he still has anything left in the tank.

The former First-Team All-Pro and 5-time Pro Bowler would probably be the best option to serve as a veteran mentor to the youth on the roster with his wealth of experience in the league. Over 12 seasons, heâ€™s tallied 384 tackles, 5 forced fumbles, and 35 interceptions in 148 games and 134 starts. He most likely wouldnâ€™t start for the Giants, but he could be a valuable depth piece for the upcoming season.

This is more of a last-resort type of scenario if the other options donâ€™t come to fruition, but Talib also has a connection with Judge through New England, so you never know. Regardless, the Giants were thrown one heck of a curveball on Thursday and now have to scramble to replace a player who they had high hopes for.

Weâ€™ll see what happens next, but itâ€™s really a shame to see such a young player likely throw his entire career out the window because of his inexcusable actions.