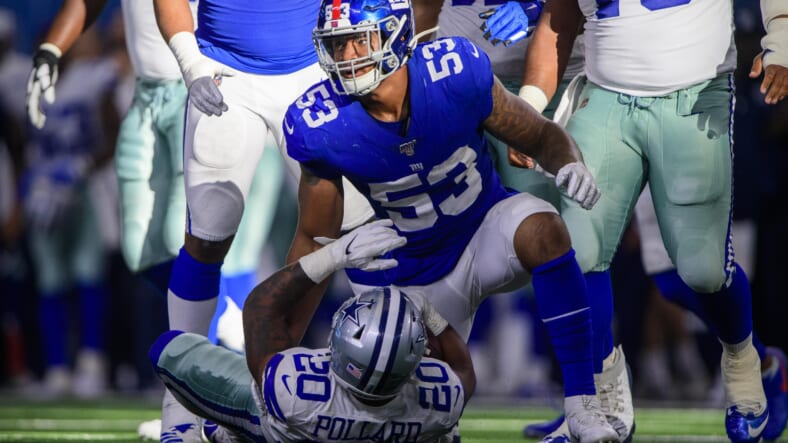 Taking a look at two breakout players for the New York Giants in 2020:

The 2019 NFL Draft saw GM Dave Gettleman allocate ample resources toward the secondary, but the players added to the roster didn’t live up to expectations. First-round corner DeAndre Baker struggled in year one, rightfully so due to the challenging transition to the NFL, and both Julian Love and Corey Ballentine experienced minimal reps.

The defense needs to take a significant step forward if the Giants want to be competitive next season, and with Gettleman signing only three free agents to solve positions of need, it’s safe to say that defensive coordinator Patrick Graham has his hands full. The lack of a star pass rusher and unproven talent at inside linebacker could be problematic, but the Giants do have players who can rise to the occasion.

Here are two breakout players for the Giants:

With pass rush a major concern, Ximines has big shoes to fill with Markus Golden expected to move on in free agency. The Giants simply don’t have the necessary cash to sign a proven outside linebacker, which resulted in Gettleman adding Kyler Fackrell on a one year deal to replicate Golden’s production.

Ximines quietly had a solid 2019 campaign, posting 4.5 sacks on 45% of defensive snaps. Compared to Golden, who plays on 83% of snaps, the Giants must be confident in Ximines and his ability to replace the former Giants with ease. I believe the former Old Dominion standout will break out for the Giants next season, simply based on his nice array of pass rush moves and underrated strength.

Adapting to the physicality and speed of the NFL takes time, and with Ximines showing he can keep up in his rookie season, we should see compounded growth on our investment.

The offensive line needs some love, and Gettleman made sure to ensure the media that they have tremendous faith in Nick Gates, who featured as a reserve option in 2019. Gates, formerly being an undrafted free agent last season, filled in valiantly at guard and tackle.

Coming out of college, he was projected as a guard due to his lack of upper body strength and anchor, but the Giants may see him as a possible fit at right tackle. I believe his frame suggests he’s more of a center, but I wouldn’t be surprised if the Giants throw him into a position battle at RT and C to see where he fits. Ultimately, I believe Gates will earn a starting spot one way or another and will prove his durability at the NFL level.