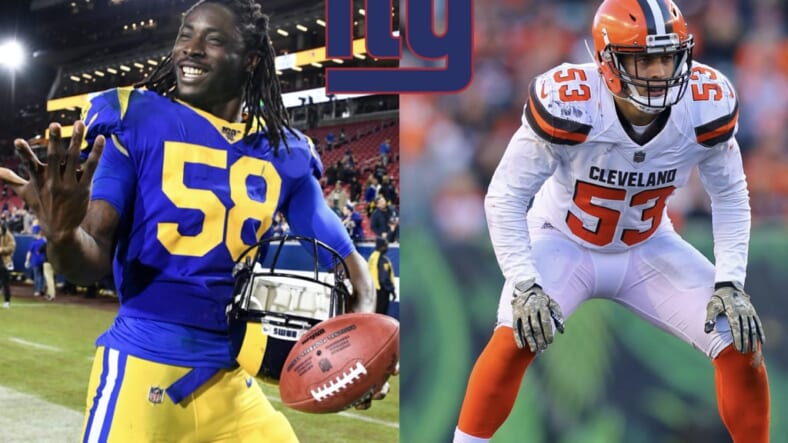 With free agency right around the corner, the New York Giants are preparing to make a splash in the market, as they will have upward of $70 million in available cap space. Despite having ample financial flexibility, the Giants need to solve a puzzle on both sides of the ball.

Needing a starting offensive tackle, linebacker, pass rusher, free safety, and No. 1 corner leaves them tied up, and they will undoubtedly allocate some of their draft capital toward the positions listed. However, the linebacker position is stocked full of capable talent in free agency. If they elect to pass on Isaiah Simmons, which will be difficult to do, there are options available.

Schobert is reportedly looking for something north of $10 million annually, which the Browns simply arenâ€™t willing to meet. The 26-year-old LB has been a three-down player for the past three seasons. Schobert racked up four interceptions and two forced fumbles in 2019, emerging as one of the defenseâ€™s true difference-making talents. The former fourth-round pick has played in 61-of-64 games since entering the league in 2016.

While Schobert wants upwards of $10 million in free agency, the Giants have the money to spend and then some. Personally, I believe the Giants should pursue Cory Littleton, as he’s the better player, and the money-differential isn’t enough to warrant not paying him.

If you thought Schobert’s numbers were good, consider Littleton’s 3.6% missed tackle rate. Littleton is as good of a tackler as you can find on the market, and the Giants need to get better in that department — he would provide the answer.

Factor in his 134 combined tackles, nine passes defended, and you can make the argument that Cory is also a ball-hawk. His ability to stay around the football and utilize his instinctual talents has been apparent during his time with Los Angeles. Bringing him to the Giants would be a vast improvement, and it shouldn’t stop them from drafting Simmons either.

Pairing Simmons with Littleton at linebacker would give Big Blue two of the best playmakers at the position in the NFL, and it leaves them with plenty of cap to sign a pass-rusher or two.