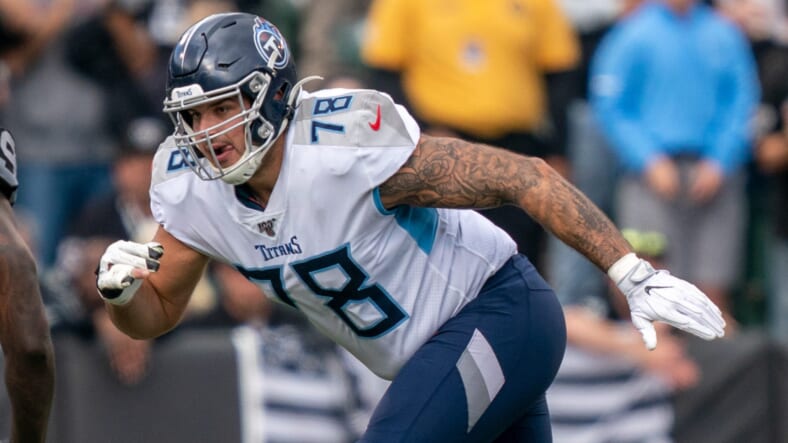 The demise of left tackle Nate Solder and inadequacy of Mike Remmers has put the New York Giants in tumultuous position going into free agency. Solder’s contract doesn’t allow him to be cut without counting $13 million in dead cap. If the Giants retain him, he will count $19.5 million against the cap, so they would only save $6.5 million if cut. They’re better of keeping him on the roster and hoping new head coach Joe Judge can turn his play around.

However, the right tackle position needs to be upgraded.

Here are two options the New York Giants should consider:

If GM Dave Gettleman dares to move Solder over to the right tackle position, he could go after Anthony Castonzo, who ranks as one of the best left tackles in the NFL.

Here’s how PFF breaks down the potential target (mind you, this was a Jets tailored assessment):

“Anthony Castonzo has been one of the best left tackles in the NFL for quite some time now, and if the New York Jets are going to pay any left tackle, it needs to be him.Â Kelvin Beachum, their 2019 starting left tackle, was the Jets’ highest-graded lineman but didn’t sniff the play of Castonzo, who was the third highest-graded left tackle in 2019. And since 2012, his lowest grade in a season is a solid 76.9.”

Fitting the former Indianapolis Colt into the offensive front would give Jones ample protection form his blind-side, but it would cost the Giants a pretty penny. I anticipate Castonzo earning upwards of $17 million per season, and while the New York Giants have the cap-space, they might be better off locking down a young talent in the draft to fill the spot on a much cheaper deal.

In the scenario that Solder remains at left tackle, Conklin is an exciting free agent that could fill the void Remmers will inevitably leave behind. With Jones being sacked 38 times in his rookie season in 12 games, upgrading this spot is a matter of who and not when.

Conklin represents a reliable player with playoffs experience, but he has struggled in the past with his consistency. The Titans rejected his 5th-year option and allowed him to walk into free agency, which should be an indication of his abilities on their offensive front. He’s a better option like Remmers, but the Giants shouldn’t overpay for his services.

As perÂ overthecap.com, Conklin projects to earn a $70 million deal with $43 million guaranteed in free agency. That’s a hefty sum, but the Giants have the ammo to get it done.

Conklin is the best right tackle on the market, and heâ€™s coming off a regular season which he finished 12th overall among tackles in PFF grade (78.3) and fifth in run-blocking grade (81.0). Conklin has some issues in pass protection, as his pass-blocking grade ranks just 49th on true pass sets over the last two seasons, and heâ€™s on the higher end among offensive tackles receiving help (double teams, chip blocks, etc). Still, Conklin is a versatile run blocker who finished with the No. 6 grade on zone runs and the No. 14 mark on gap runs. Heâ€™s been one of the better right tackles in the league since being drafted in the first round in 2016.

In 2019, Conklin recorded the highest run-block grade of his career, the fifth-highest among right tackles. Overall, he was among the 10 best offensive tackles in PFF grade. His pass-protection wasnâ€™t the best as he sat right at the 50th percentile among offensive tackles in PFF grade on true pass sets, but Conklin constantly made holes for [Derrick] Henry and the Titans running game. His positively graded run-block percentage was at the 91st percentile and his zone-blocking grade was at the 94th.