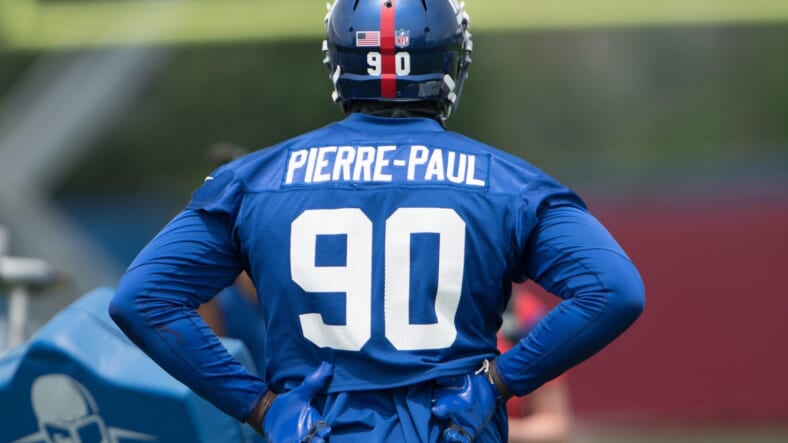 JPP: "I’m coming for their necks, and they know that. Jason Pierre-Paul ain’t going nowhere. I’m going to Monday Night Football and going to destroy the Giants. That’s what I want to do as an individual, you know what I mean, but I still have love for ‘em. Period."

Pierre-Paul talked about his former employers with aggression. The Buccaneers defensive end wants to “destroy the Giants” on Monday Night Football, essentially asserting his dominance that New York fans know a lot about.

JPP has had an illustrious career thus far, with the majority of the games coming with the New York Giants. In blue and red, Jason Pierre-Paul had 312 solo tackles, 87 tackles for loss, 58.5 sacks, 13 forced fumbles, two interceptions, and three total touchdowns. He was nothing short of elite as he earned one First-team All-Pro (2011) nomination and was a two-time Pro Bowler (2011, 2012).

However, his dominance did not just pertain to the regular season for Big Blue. What JPP is most known for is the illustrious performance he had in the 2011 season and playoffs. His superb gameplay helped earn the Giants its fourth Lombardi Trophy.

In this season, Pierre-Paul had 86 total tackles, 23 tackles for loss, 28 QB hits,16.5 sacks, and two forced fumbles. When it came time for the playoffs, JPP also did not disappoint as he had 18 total tackles, four tackles for loss, four passes defended, and two QB hits. In the Super Bowl specifically, he had one tackle for loss, two passes defended, and one QB hit. This helped cap off one of the most prolific seasons ever from a Giant.

However, now in 2020, JPP will be returning to East Rutherford, a place where he was once adored, as a member of the Tampa Bay Buccaneers. This will be now his second time playing New York in another jersey but his first time coming back to MetLife.

In this matchup, JPP will be doing everything he can to win and dominate Big Blue. And even though Jason Pierre-Paul may be “coming for their necks” he still has “love” for his former organization and the feeling from Giants fans seems to be mutual.