How much cap space do the New York Giants project to have in 2023? 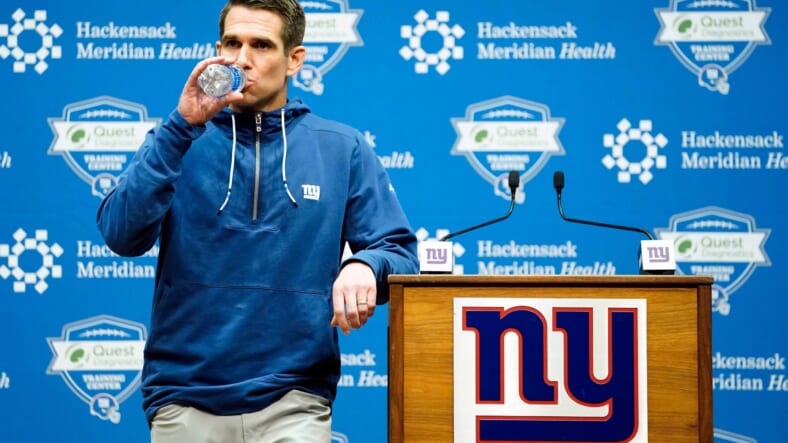 The New York Giants are listed as potential buyers ahead of the 2022 NFL Trade Deadline. The deadline takes place tomorrow afternoon (November 2). General manager Joe Schoen could look to make a deal to bolster the Giants’ roster for the second half of the season after an impressive 6-2 start. But the Giants’ salary cap situation might get in the way as the team builds toward a brighter long-term future.

The Giants have two big-name players with contracts expiring this upcoming offseason. Saquon Barkley and Daniel Jones are both playing out the final year of their deals. The Giants opted to decline Daniel Jones’s fifth-year option, which means he is not under contract for the 2023 season. Saquon Barkley is on the fifth and final year of his deal, meaning he is also set to become a free agent at the end of this season. What the Giants decide to do with these two players will greatly affect their future salary cap situation.

Daniel Jones and Saquon Barkley are playing their way into extensions with the Giants. But they are not the only players who might be looking to cash in this offseason. Other players like Sterling Shepard and Julian Love might also be candidates for an extension.

How this affects the Giants ahead of the 2022 trade deadline

Trading away Kadarius Toney only freed up about $755,000 for the Giants to spend this season. New York currently has a total cap space of around $3.56 million. They do not have much room to work with if they are targeting a big-name receiver at the deadline like Jerry Jeudy or Brandin Cooks. If the Giants happen to make the sacrifice of a high-end 2023 pick for one of those players, they will also need to sacrifice some roster talent to make salary space, as well.

How much cap space will the Giants have in 2023?

The New York Giants are currently projected to have around $54.6 million in salary cap space during the 2023 offseason. Of course, that is before the team makes any deals at the trade deadline or extends players such as Daniel Jones and Saquon Barkley. The Giants are considered one of the NFL teams with the healthiest three-year salary cap construction, per PFF. Big Blue ranks second in the NFL in effective salary cap space from 2022-2024. As the team looks ahead and builds toward the future, they can rest easy knowing that whatever deals they make during this season will not financially ruin the team. The New York Giants have the salary cap space and then some to make moves for and in the future.