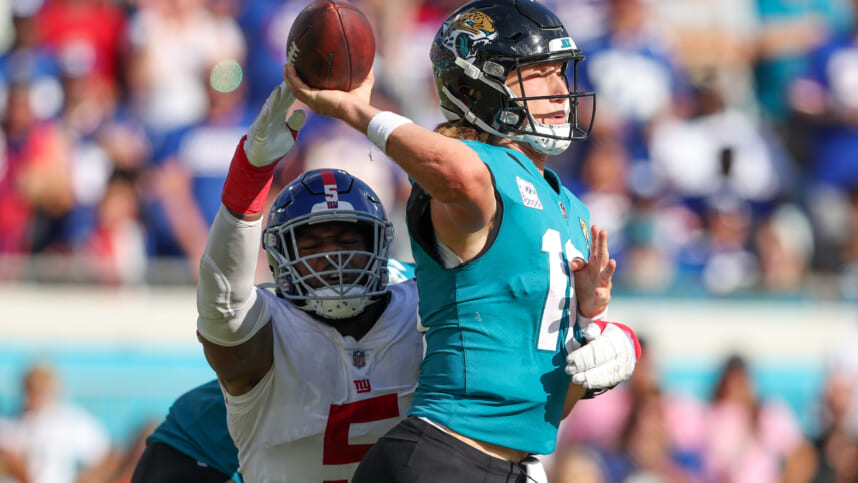 The New York Giants are getting off to a hot start this year, starting the season with a 6-1 record. Big Blue has shocked the NFL world as they have mounted numerous comeback victories to propel themselves toward the top of the league’s standings. A catalyst to the Giants’ success has been rookie pass-rusher Kayvon Thibodeaux. The New York Giants’ 2022 fifth overall draft pick has stepped in and made a huge impact during his rookie season.

Kayvon Thibodeaux making a huge impact for the Giants

Despite missing the first two weeks of the season, Kayvon Thibodeaux is putting together a rather impressive rookie campaign. The Oregon product has shown up big for the Giants late in games, highlighted by his game-winning strip sack on Lamar Jackson in Week Six. Thibodeaux also got after Trevor Lawrence in the fourth quarter of the Giants’ Week 7 victory. A fourth-quarter Thibodeaux pressure caused an errant throw by Lawrence, resulting in a three-and-out on the drive.

Clutch plays in the fourth quarter demonstrate Kayvon Thibodeaux’s impact with the team. But it is obvious now that Thibs is an every-down player. His effort was on full display in Jacksonville as the rookie pass-rusher outran defensive backs and made a downfield tackle on Travis Ettiene:

On 140 pass-rushing snaps through five games, Kayvon Thibodeaux has racked up 14 total pressures (NFL Rookie Watch). He has also recorded 11 hurries (2nd among rookies) and 2 batted passes (T-2nd among rookies), along with a 13.9% pass rush win rate (first among all qualified rookies). Kayvon has been low-key dominating opponents for the New York Giants.

It is hard not to notice Kayvon Thibodeaux when he is on the field. The rookie first-round draft pick has made an instant impact with Big Blue through five games. The New York Giants are winning games and their fifth-overall pick is a big reason why.