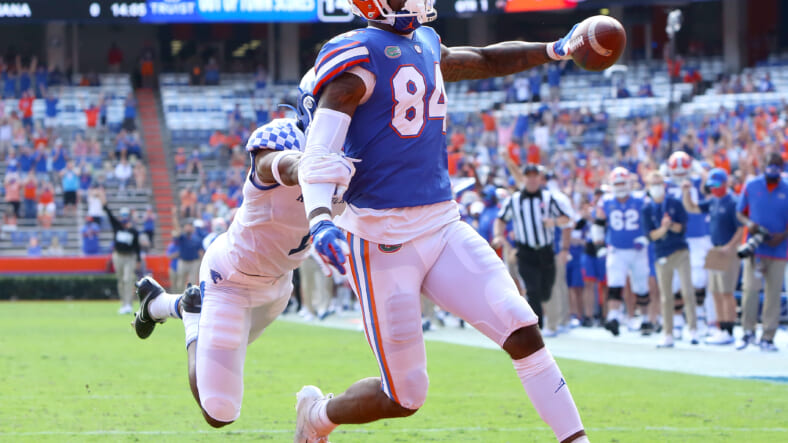 There have been rumors that New York Giants general manager Dave Gettleman is enamored by Florida tight end Kyle Pitts, and my response to that would be, who isnâ€™t?

Pitts is considered one of the best playmakers in this draft class, as analysts believe heâ€™s not simply an in-line TE but can also play receiver on the outside and the slot. His diverse makeup makes him not only an incredible talent but a gold standard prospect as we near the 2021 NFL draft.

While Pitts started out as a mid-round selection several months ago, he has quickly gained steam, and most teams believe heâ€™ll be selected in the top 10 picks, as the Giants wait patiently at 11 for a miracle to happen.

However, GMFB proposed a ludicrous trade-up scenario that would involve the Giants parting ways with significant draft capital, despite the fact that they have an opportunity to land an elite prospect at 11 anyway.

New York Giants trade up to #4 with the Atlanta Falcons:

In this scenario, the Giants give up two first-round picks, a second-rounder, and their starting tight end to Atlanta for Kyle. This is an astronomical deal for a non-quarterback, and if the Giants made this, they would be castrating their future flexibility in the draft for years to come.

In fact, this is a step-by-step breakdown of how to ruin a developing team in one off-season. Draft capital is extremely important for a rebuild, especially when you were trying to add depth and even starting level talent to multiple positions of weakness. GMFB so graciously sells the farm for Pitts, who is a fantastic talent, but the Giants are going to have a fair shot a DeVonta Smith, Jaylen Waddle, and even Micah Parsons, who are all considered some of the best players in this draft class.

We can grade this scenario as an F+, considering the Giants only have six selections this year and need all of their picks to bolster their depth and add a few productive talents in the early rounds. If the Giants managed to grab Smith or Waddle and add an interior OL in the second round, you could argue that would be a far more efficient draft strategy than selling out for Pitts.