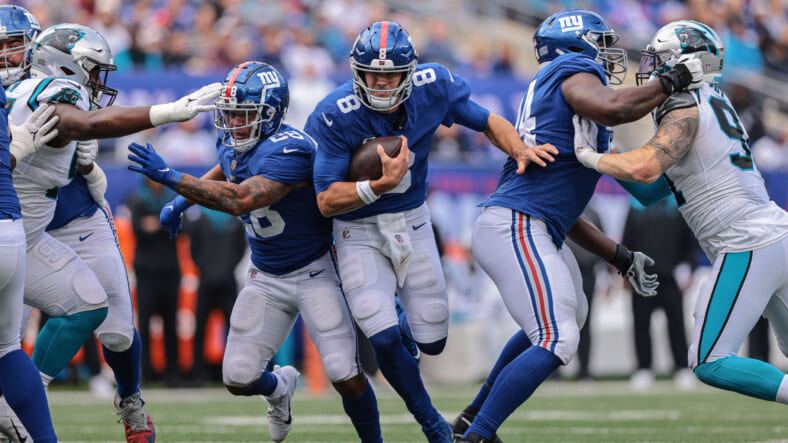 The New York Giants need every advantage they can muster against the Tampa Bay Buccaneers this upcoming Monday in Prime Time. Quarterback Daniel Jones has never emerged victorious in a nationally televised game, but he will be looking to acquire his first against a Buccaneers team that has struggled lately.

The Buccaneers are coming off a disappointing defeat to the Washington Football Team, and rarely, Tom Brady has lost consecutive games. However, Washington was successful in shutting down Brady, recording two interceptions, and holding the Tampa offense to just 21 minutes of possession. Knowing the perennial All-Pro quarterback, he will be looking to bounce back against a Giants team that has proven to be vulnerable.

Washington did a fantastic job stopping the run and creating pressure on receivers to give the defense opportunities to turn the ball over. The Giants need to do something similar, coming off a solid win against the Las Vegas Raiders before their bye week — forcing two INTs from Derrick Carr and a strip-sack to end the game.

Luckily, the Buccaneers are expected to be without multiple starters, including several on defense that would give the offensive line a far easier day.

The Bucs are projected to be without multiple starters on both sides of the ball:

Without Pierre-Paul and Vita Vea, the Giants will have a more manageable time stopping the Bucs’ pass rush, but that doesnâ€™t mean they will play at a high level. Tampa still has Shaquil Barrett and rookie Joe Tryon, who has displayed flashes of talent this year.

Hopefully, Big Blue will gain back left tackle Andrew Thomas for the contest, as he participated in practice on Thursday, brewing a bit of optimism he would be ready to play. However, if Matt Peart is starting once again, expect heavy doses of Devontae Booker in the running game and short passing concepts due to a lack of time in the pocket for Daniel Jones.

The presence of Thomas changes the offense’s strategy completely, allowing them to target receivers downfield and operate at a far more productive level. Considering Tampa’s secondary is extremely thin, and their defensive line is dealing with injuries to big players, this is a perfect opportunity for the Giants to beat a struggling team and keep themselves in the hunt for the Wild Card.