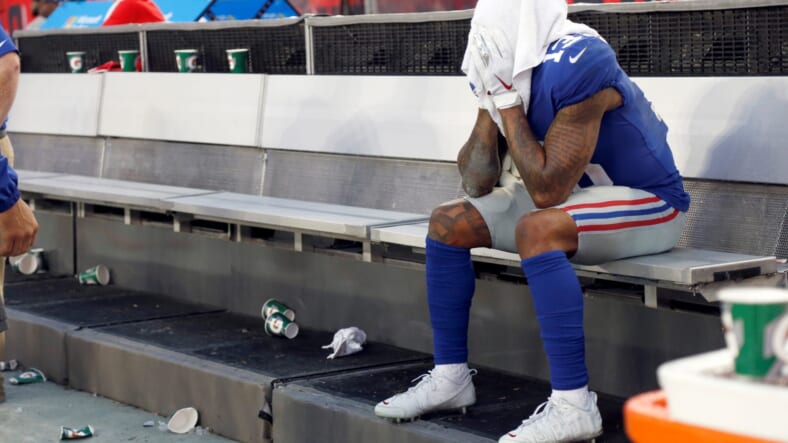 The New York Giants currently stare at a 1-6 record on the season as they prepare to face off against the Washington Redskins on Sunday afternoon, and one player that will remain focused and poised is Odell Beckham Jr.

The star receiver recently signed a massive contract with the very team that drafted him just four years ago, yet his destiny has been stained by a massive amount of losses due to a revolving roster and inadequate decision makers. Former general manager Jerry Reese is to blame for most of the problems on the team, while new-comber Dave Gettleman has had his fair share of issues as well.

Reese was deadly poor at hitting during the NFL Draft, but had good luck in free agency. Gettleman is the opposite, which is good for the Giants, being that draft picks are the foundation of any team and not veteran free agents.

Beckham has proved his worth on the field for the Giants, but has caused commotion along the way in the media. His words have been heard this season more than ever, especially his interview with ESPN that told the truth in regard to his feeling towards New York and his team. Now, after two players have been traded this week, the narrative has changed to focus on the rebuild of the organization, and Beckham seems to be caught in the middle of it.

Gettleman traded cornerback Eli Apple and star defensive nose tackle Damon Harrison to clear cap-space for the near future. The rebuild surely isn’t accepted by most players, especially for determined ones like Beckham.

Here’s what Odell Beckham Jr. had to say on if he has any regrets or feelings about the franchise:

â€œI got New York tatted all on my back,â€ Beckham told The New York Post. â€œMy whole back is covered by New York.â€

In regard to his record breaking deal :

â€œI canâ€™t take anything back, I donâ€™t have any regrets.”

â€œI donâ€™t really know. Itâ€™s not really re-sign, I kinda signed something, I could have been here for another three years, so. â€¦ Itâ€™s hard to think about that now and itâ€™s really irrelevant to think about now, â€™cause Iâ€™m here, and I will be here.â€

Everything the star receiver said was good in terms of media usage. We can assume his feelings have changed internally, but on the outside he has said the right things to ensure he doesn’t stir up any more drama going into week 8. Moving forward, we should expect to see the younger players on the roster receive more game experience, but it will be pushed by a progressive mentality that only wants to improve the team in the long-run.