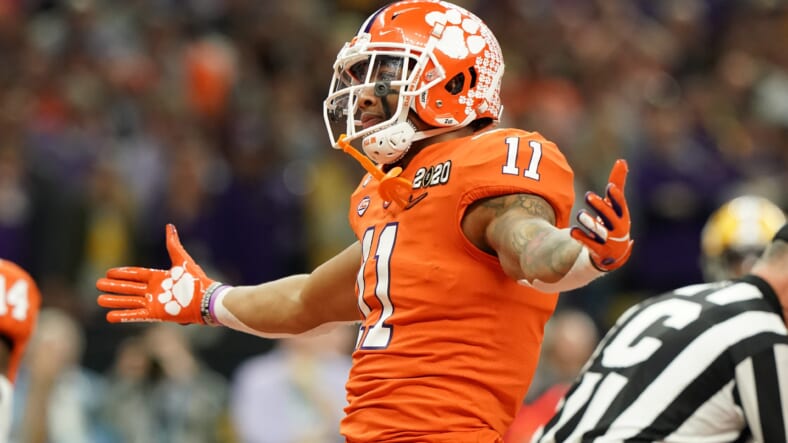 The New York Giants are going through a lot of changes this offseason but with the Coronavirus pandemic ravaging the globe, especially the New York/New Jersey metro area. Like everything else in our world, those changes are currently on hold.

I’ve gotten quite a number of emails and messages on social media the past few weeks regarding all aspects of the Giants’ offseason, what they’ve done and what they might do. Here are the top four questions that have been hurled at me…

What will the Giants do with the No. 4 overall pick in the draft?

Clemson LB Isaiah Simmons is the favorite among Giant fans and he would likely be available when they are on the clock at No. 4. Dave Gettleman has got to take a hog mollie – or two – for the offensive line in this draft because the line is in need of tackles and a center. If he takes the bait and drafts Simmons (providing Chase Young doesn’t miraculously fall to them), he could make that up by taking Michigan center Carlos Ruiz in Round 2 or Temple’s Matt Hennessy or Nick Harris of Washington in Round 3. After the first round, there aren’t many quality tackles to be had, so he might just bite the bullet and grab either Tristan Wirfs of Iowa or Alabama’s Jedrick Wills, Jr. at No. 4. If he does not take a tackle there, he could luck into one in the second or third rounds but it’s risky.

Are the Giants done signing free agents this year?

I would say so. They may have one more mid-level signing in them. Who that will be is unknown, maybe an offensive lineman or center if they can’t find one in the draft. One thing they probably won’t be doing is re-signing Markus Golden, who wants $8-10 million per annum. They currently have approximately $16 million in cap space but $12 million of that is earmarked for the incoming rookie class. They won’t use all $12 million and you can expect Gettleman to hang onto some cash just in case of an emergency, so they’ll go into the season with about $6-7 million in cap space for a rainy day.

Based on what we saw what Graham did as DC with the Miami Dolphins last season, I believe he’d lean towards 3-4 base alignment. That would be a certainty if the Giants take Simmons in the draft. Â In the 3-4, I see the Giants going with Leonard Williams, Dexter Lawrence and Dalvin Tomlinson up front with Lorenzo Carter and Kyler Fackrell as the OLBs flanking Blake Martinez and David Mayo/Ryan Connelly on the inside. The secondary will start James Bradberry and DeAndre Baker at corner with Jabrill Peppers and Julian Love at safety. Simmons would likely replace Mayo and/or Connelly on the inside if drafted and Love would be challenged by any rookie safety the team brings in. The Giants could switch to 4-3 when needed. They signed Austin Johnson in free agency and still have B.J. Hill and R.J. McIntosh on the roster.

Do you think Joe Judge was the right choice for head coach?

Fennelly: Yes. I think Judge is a fresh face that brings a classic approach to coaching. He has a lot of Bill Belichick in him but has a more vocal, convincing presence about him. We won’t know what his affect on the team will be until the Giants take the field. I think he has the right approach when it comes to preparation and discipline. I feel the players will take to him. His game strategy will vary from week-to-week – which it should – and he will lean on the very diverse and talented staff he and Gettleman put together. The question of any coach should be how well they adjust in-game. His old boss is the best at that and Giant fans are hoping that trait has rubbed off on Judge.