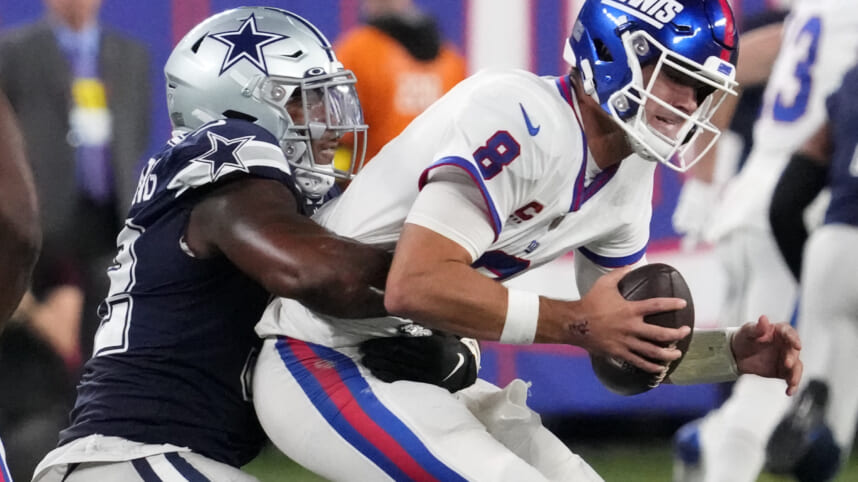 The New York Giants picked up their first loss of the season tonight after falling short against the Dallas Cowboys. The Cowboys topped the Giants 23-16 on Monday Night Football as New York’s record falls to 2-1 on the season. After two close-wins to start the year, the Giants came up short on primetime.

Main takeaways from Giants vs Cowboys in Week Three

Daniel Jones spent the majority of his night under pressure. The Giants’ offensive line struggled to protect the quarterback, causing numerous broken plays. Despite being under constant duress, Daniel Jones turned in a solid performance, all things considered, keeping drives alive with impressive passes and clutch scramble drills. Jones only totaled 196 passing yards and one interception in the end, but he did add 79 rushing yards.

The Giants’ offense failed to turn drives into touchdowns for the majority of the night. Once again, Graham Gano did the heavy lifting, scoring nine points. Gano netted field goals from 42 yards, 51 yards, and a second from 51 yards.

The main storyline for the New York Giants will be the many failures of their offensive line. Daniel Jones was sacked five times in the loss. Every time the Giants’ offense started clicking, Jones would be faced with pressure or buried in the backfield, killing the momentum that Big Blue started building.

Saquon Barkley also turned in a solid performance that ended up being too little, too late. He rushed for 81 yards on fourteen carries with a 36-yards score on the ground and 45 receiving yards on four receptions.

The Giants’ defense struggled to contain the Dallas Cowboys’ rushing attack. Tony Pollard had 105 yards on only 13 carries and Ezekiel Elliot also ran for 73 and one touchdown on 15 carries. On top of that, wide receiver Ceedee Lamb hauled in eight receptions for 87 yards and one touchdown.

Sterling Shepard went down on the New York Giants’ final offensive play of the game. Shepard, the longest-tenured player on the Giants, was carted off with what appears to be a significant lower-body injury.