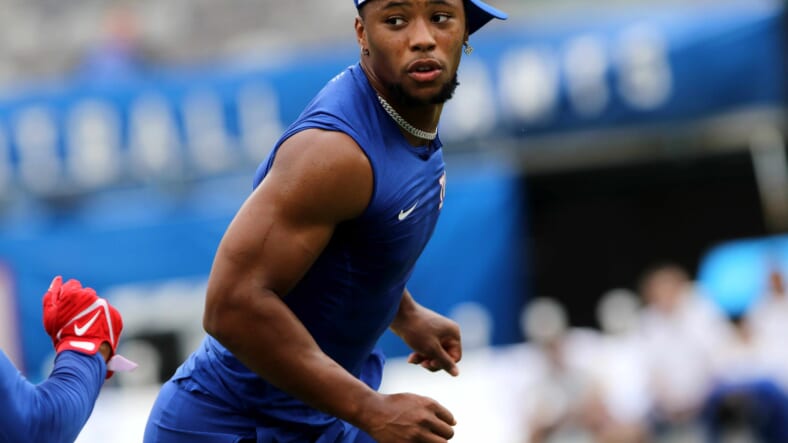 The New York Giants are preparing to take on the Las Vegas Raiders on Sunday afternoon, and it will be another uphill battle with injuries persisting on offense. The Giants were forced to play without Kenny Golladay, Saquon Barkley, and a limited Kadarius Toney last Monday against the Kansas City Chiefs, but theyâ€™re aiming to return several players to full health, who should contribute heavily towards a more efficient unit.

Free-agent acquisition Kenny Golladay has played in just five games for the Giants this season, recording 282 yards and zero touchdowns. He has featured in 73% of the snaps available to him when healthy, but a hyperextended knee against the Dallas Cowboys threw his season off a bit.

Luckily, Golladay is expected to return on Sunday against the Raiders, enjoying a full practice on Friday to prove his clean bill of health. The Giants desperately need him to be the big possession receiver they paid a significant amount of money for this past off-season. Quarterback Daniel Jones needs more support and pass catchers who wonâ€™t drop the football, — Golladay needs to be that option.

Kadarius Toney was active last week against Kansas City but played a decoy role to help the remainder of the offense succeed (that plan failed miserably). Unfortunately, his impact was minimal, catching four passes for 26 yards.

Toney has been dealing with an ankle injury since before the season began and picked up a laceration on his thumb against the Chiefs. He was another full participant on Friday, so expect him to be heavily involved in the game plan this weekend.

Running back, Saquon Barkley escaped with a false positive COVID-19 test this week after coach Brian Burns contracted the virus. Barkley returned to the Giants on Friday but was unable to practice, still dealing with swelling on the low ankle sprain he suffered against Dallas.

I wouldnâ€™t expect to see Barkley this weekend, and even next weekend is in question. It is entirely possible they wait until after the bye week to utilize Barkley in his usual role.