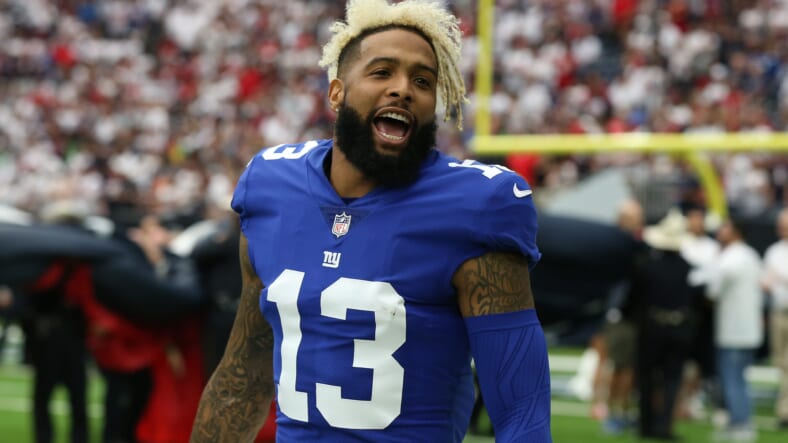 The New York Giants stayed put at the 2022 NFL trade deadline. Despite some rumors and speculation, the Giants did not make any trades today. Wide receivers were dealt elsewhere as the Giants opted to maintain their future draft capital and win with the team they have in place. After the deadline passed, general manager Joe Schoen held a press conference where he explained his reasoning behind not making a trade. In the discussion, available free agent wide receivers were brought up, including former New York Giants wideout Odell Beckham Jr. Bringing back Beckham is a move that Joe Schoen could consider making at some point later this season.

New York Giants general manager Joe Schoen left the door open for veteran free agent wide receiver Odell Beckham Jr. today. When asked about the possibility of signing Beckham for the remaining portion of the season, Schoen said that this is an acquisition he would “consider.”

“He’s been a good player. He’s a guy we would consider and talk to when he’s healthy.”

Joe Schoen on the possibility of the New York Giants signing Odell Beckham Jr. this season

Odell Beckham Jr. was inside the New York Giants’ facilities recently, though, Joe Schoen admits he had “no idea.” Beckham’s visit was not with the team brass but rather to check in on friends he played with during his time in Big Blue.

Odell Beckham Jr., the former New York Giants megastar, has maintained an inconsistent level of success since his departure from the team in 2019. After the Giants traded OBJ away to Cleveland, he suffered a string of injuries before landing in Los Angeles with the Rams and suffering another injury in the Super Bowl.

At this stage in his career, it is difficult to say what Odell could provide to the Giants. The 2014 first-round pick played in 21 games from 2020 to 2021, totaling 856 yards and 8 touchdowns. The ACL tear he suffered in February has kept him sidelined for the entirety of the 2022 season. But reports indicate that Beckham could be close to making a comeback.

A potential Thanksgiving return is in the cards for Odell. The Giants could look to sign him as a late-season addition to aid their playoff contention efforts. However, OBJ will have numerous suitors. Teams will be competitive in their pursuit of Odell for his potential to boost an offense during the postseason. Because he will be in high demand, Beckham will also be high in price. The Giants are a cap-strapped team with only around $3.56 million dollars in available space to last the rest of the season. This will make it difficult for Big Blue to complete a reunion with Odell Beckham Jr. before the season’s end.