Giants could have dynamic pass rush duo on the defensive line 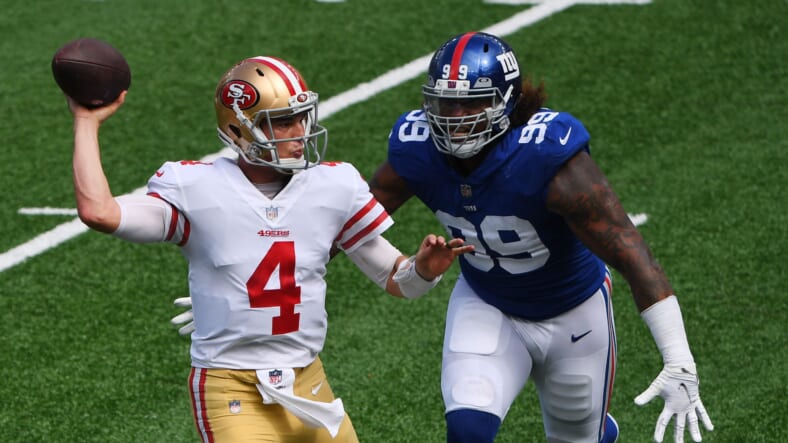 When the New York Giants initially drafted Azeez Ojulari 50th overall in the 2021 NFL draft, they envisioned the overhauling of their outside linebackers unit. With one of the best interior defenses in the NFL, consisting of Leonard Williams and Dexter Lawrence, adding a few high-quality pass rushers on the outside would theoretically give the Giants a tantalizing pass rush.

With Williams signing a fresh three-year, $63 million deal with the Giants, heâ€™s hoping to replicate his 2020 production, where he posted 11.5 sacks, 57 tackles, and 30 QB hits. He set career highs in nearly every pass rush category, including a low 3.4% missed tackle rate, indicating consistency as a tackler.

As the Giants’ top interior defender and arguably their best player, pairing him with Georgia stand-out Ojulari could provide the Giants a dynamic pass rush duo.

Ojulari ranked first in both sacks (9.5) and forced fumbles (4.0) last season in the SEC, registering a unique ability to curate turnovers at the point of attack. With an incredible bend and a great club move, Azeez is primed to be an effective pass rusher right out of the gate, which is exactly what the Giants need considering their lack of talent last year at the position.

Williams demands considerable attention in the trenches, commanding double teams frequently, which should theoretically allow Ojulari to face off against singular players. With his athleticism, speed, and band, getting around the edge will likely be his go-to move in his rookie season. If he can effectively overwhelm tackles, the Giants will have a good shot at improving their sack totals next season (40 total in 2020).

Surprisingly, the Giants and Ojulari were being linked with the 11th overall pick just days before the draft, let alone the 50th. In an extremely lucky series of events, the Giants managed to trade back, acquiring a third-round selection while also adding arguably the most talented pass rusher in the draft class. A torn ACL several years ago was of concern from some teams, but general manager Dave Gettleman assured the fan base that Ojulariâ€™s knee was not a concerning factor.

With coordinator Patrick Graham looking to rely on Cover-1 defense in 2021, a focus on pass-rush will ultimately be a bi-product. It was clear the Giants prioritized adding OLBs to the roster, signing and drafting a total of four, let alone the comeback of Lorenzo Carter and Oshane Ximines.

However, Ojulari is the only option that has unlimited upside, with the exception of Elerson Smith, who is a bit undersized but could end up being a stellar rotational piece earlier in his career.