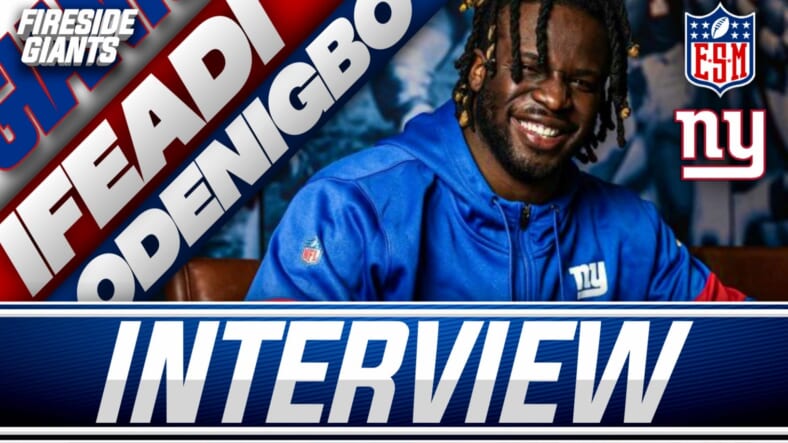 The New York Giants made a key addition on the defensive side of the ball this free agency period. New York signed Ifeadi Odenigbo, formerly of the Minnesota Vikings, to a one-year $2.5 million contract. Odenigbo is a four-year NFL veteran that had his breakout season in 2019, totaling 7 sacks that season.

Empire Sports Media had the great privilege of speaking to Ifeadi in an exclusive interview on Fireside Giants. Co-hosts Alex Wilson and Anthony Rivardo enjoyed interviewing Ifeadi Odenigbo and asking him a plethora of questions regarding his football career and his life off-the-field. You can watch the video version of the interview on the Fireside Giants YouTube Channel here.

Q: “Are you excited to be with the New York Giants and how has this transition been for you?”

It’s been pretty unique just because it’s still COVID-near. So like right now we’re trying to figure out OTA’s, are we going, are we not going? But when I got here to sign my contract about a month ago I got to meet the coaching staff, I got to meet the GM, which was pretty exciting. They seemed pretty excited. They know that they have a plan for me. I’m just excited that an organization wants me and I’m gonna do my best for them.

Q: “Coach Joe Judge, what was your first impression of him? He’s a pretty intense guy.”

Yeah, yeah, yeah, dude, I could sense that intensity from a mile away. I’m like, ‘Alright, it’s all business baby.’ That’s how it was with Coach Zimmer, so this is nothing ne to me just from a standpoint of getting from college to the NFL, this is a business, you’re here to win games. There’s a lot, too much is given, much is expected, so I understand this organization and that’s no problem to me.

Q: “Did you get that feeling that the Giants are ready to win? That Joe Judge has that winning mentality? You were coming to a place to be with a team that has a chance to be great. Do you see that with the Giants?”

Absolutely. I’ve actually had the chance this year to workout with Leonard Williams. Leonard was here at House of Athletes for a couple of weeks, I think he’s back in California, but I think he’s going to come back again. Right now I’m working out with Dexter Lawrence and I’ve gotten to know him pretty well, so we’re building chemistry. I actually ran into Nate Solder today. I’m slowly talking to more and more Giants, just getting the vibe and understanding what’s expected of me when I get there.

Q: “Karl told us you have a ‘samurai’s dedication’ towards training and everything in your life. What is that like?”

I came to Miami not really knowing anyone. But I came to Miami because I do my research. This year I was like, ‘Alright, I have a little more money, I have been in the NFL, I can start spending more,’ so I was doing my due diligence and the resources in Miami are pretty good, so I was like, ‘yeah let me come down here, try it here, if I don’t like it here, I’ll go somewhere else.’ I was in Chicago last year, the year before I was in Ohio so I’ve kind of been all over the place. What’s cool about going to all these different places is just gaining a different type of perspective, a different type of working out, and these are all things I can add to my arsenal to help stay in shape. So you work with one coach for a couple months, you understand what he wants from you. You take what’s useful, you get rid of what wasn’t useful, then you move on to the next coach and it’s all about applying it, just getting better every day.

Q: “Are you excited to move to New York now?”

Heck yes, man! It’s a big market! If you can win in New York, that’s the best place to be at! Obviously the New York media is one of the most brutal, they keep it real. So ‘don’t take it personal,’ but I’m excited for the big stage, I feel like I was born for this, and I’m ready to give New York everything I have.

Q: “You’re now a member of the New York Giants. What was that one motivating factor that made you say, ‘New York is the place for me to be.'”

Just from a standpoint, so like my agent and I, when I was a free agent, I had a bunch of teams that were all making offers but the Giants seemed pretty aggressive. I think you want the feeling to be mutual. What’s kind of cool about this is the fact that when you hit free agency it’s kind of like high school all over again. You actually have the choice to choose instead of being draft. Like, ‘Ope! They drafted me, I have no say in this! Better make the best of the situation!’ So seeing New York have that much interest in me and saying like, ‘Hey we have a plan for you, we think you fit our scheme. We’re doing something special here.’ I was kind of sold on that. And I was born in New Jersey, I lived here for two years. So coming back, I’m already kind of familiar with the area because I have some family that lives here. I was like, ‘Alright, you can’t write a better story than this.’ I’m excited with what Coach Judge has to offer. I’ve heard that it’s a pretty intense organization but I’m an intense guy so I guess that’s harmony right there.

Q: “New team, new scheme. In Minnesota, they kind of lined you up all over the defensive line. A lot of the time you lined up over the guard, over the tackle, outside the tackle on the edge, sometimes even over the center. So, with the Giants, have you spoken to them? Where do you see yourself lining up primarily and where are you most comfortable?

So I think we’ll find out more at OTA’s. Virtual voluntary workouts start this Monday so I’ll get more of an idea. But once we start having these meetings, once they get to see me in person and see me in-depth they’ll have an idea. I’m assuming that they’re gonna try me all over because I’m kind of like the lunch-pail guy. Put me at 3-Tech, put me over the nose, put me at 5-Tech, put me against a tight end. I’ll find a way to win. When I was in Minnesota I was a utility guy. I’m here to compliment Leonard and Dexter. Those are my D-tackles, those are the monsters. I’m happy to be a part of the Giants. But most importantly I’m a team-first guy and when you’re a team-first guy, at the end of the day when everyone starts to do you part you naturally start making plays. One thing I’ve learned about defensive line, it’s complimentary. When Dexter, when Leonard’s making plays, I’ll start making plays. When I start making plays, they’re making plays. We all need each other.

Q: “When you line up outside of the tackle, throughout most of your career, you’ve had your hand in the dirt. Now the Giants run this 3-4 defense where they have their outside linebackers rushing off of the edge. So you might be playing more in a two-point stance, I would assume. How comfortable are you with that?”

So obviously that’s something new. But that’s something I’ve kind of dreamed of. Kind of what Karl was saying. In high school I was getting recruited from the majority of schools as an outside linebacker. But now, I guess it’s never too late to be an outside linebacker. So I guess ten years later my dream finally comes true. So right now during this training in Miami I’ve been doing a lot out of a two-point stance, a lot of dropping, a lot of rushing. What’s cool about being in a two-point stance is that my d-tackle is in a 4i. So in Minnesota I’d be in a tight-five and my d-tackle would be a 3-Tech. But now, when your d-tackle is in a 4i, meaning that he is lined up on the inside shoulder of the offensive tackle, the tackle has to be honest. A lot of the time when a tackle is lined up against a 3-Tech the tackle doesn’t account for him and he can kind of cheat the set. But he has to play it honest now because if he tries to jump the defensive end or outside linebacker he leaves a huge gap for the defensive tackle to make plays and that leaves a lot of stress on the guard.

Q: “At one point, you were a practice squad player. Now you’ve risen through the ranks, got a nice contract with the Giants and are expected to be a pretty big part of this defense. How has it been rising through the ranks throughout your career and what kind of chip does that put on your shoulder?”

Hey, humble beginnings, man! I remember being a practice squad player and being like, ‘Man, I really don’t like my role.’ That was the year that the Minneapolis Miracle happened so it was cool being part of that and seeing that but I was like, ‘Man, I really wanna be on this field.’ So unfortunately the next year I wasn’t able to make the active roster, so I went out to Cleveland for a little bit, then Arizona, then came back to Minnesota. But just being a journeyman for a little bit and seeing that side of football where your love of the game gets truly tested. I knew for a fact that I have what it takes, that I love this game and I don’t take any day for granted. You only have so many years to play football, so why waste it? I still kind of have that chip on my shoulder every day when I walk in. I was cut multiple times, people didn’t believe in me but I believed in myself and I know I have what it takes to make the next level and be a contributer on any team.

Q: “In 2019 you finally got that chance and your first career sack came against the New York Giants as you brought Daniel Jones down for a 12-yard loss. What do you think about Daniel Jones? That’s your quarterback, that’s the guy. How confident are you with him leading the team in year three?”

Hey, Danny Dimes, baby! I’m a believer man. That boy can run! I know everyone was giving him grief on Thursday Night Football when he fell, but they clocked him going 21-22 miles per hour. I think in this day and age, having a quarterback that has a great arm, I think he is number one in the league on throws 25 yards or over… Just knowing that a young quarterback like him is not afraid to take a shot, I think that’s huge. Obviously we got some big free agency weapons. I think the Giants are doing a great job surrounding him with talent. That’s my quarterback and I’m happy that he’s the Giants’ quarterback and I’m happy to be part of this team.

Q: “What has been your impression so far of the Joe Judge culture?”

It’s a business, man. He’s a Patriots disciple. So those practices are going to be intense, you gotta bring it every day. That’s nothing new to me. Just understanding that he’s hard to please, like the classic old-school father like, ‘Hey, dad, is this good enough?’ ‘No.’ It’s never good enough so just understanding that and doing what is expected.