Do the Giants have a shot at taking down the Kansas City Chiefs in Prime Time? 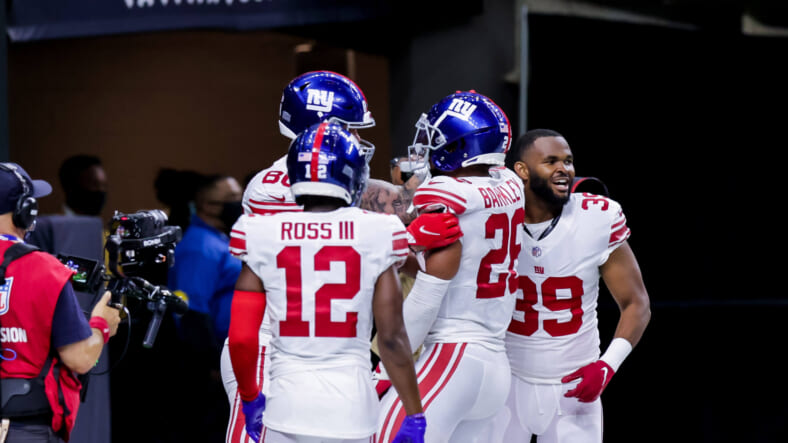 To everybody’s surprise, the Kansas City Chiefs currently sit 3â€“4 on the season and rank 3rd in the AFC West. Having lost two of their last three games, including defeats to the Tennessee Titans and Buffalo Bills, there is a small chance the New York Giants can squeak out a victory in Week 8.

The Giants are coming off a surprising victory over the Carolina Panthers this past weekend, despite having the majority of their offensive weapons out due to injury and offensive line thinned to a minimum once again.

The Giants allowed just three points, showcasing the defense anticipated when the season began. However, big Blue still only ranks 23rd in points allowed per game, giving up 125.6 rushing yards and 243 passing yards. The Giants have found themselves in the top 15 in passing yards allowed post-Carolina win, where Sam Darnold and PJ Walker combined for 117 yards gained through the air.

The Giants are far from being a quality team, but they might be catching Kansas City at the right moment after being embarrassed by Tennessee last weekend. Kansas City scored just three points, courtesy of a Harrison Butker field goal in the third quarter. The Titans scored 27 — the Chiefs’ defense ranks even worse than the Giants, giving up 29 points per game, 129 rushing yards, and 275 passing yards.

So the question is, can the Giants find a way to extract a third victory of the season against Kansas City?

Ultimately, it will boil down to the offense and how well the line performs, protecting Daniel Jones. Last week, coordinator Jason Garrett did a solid job finding ways to buy Jones time in the pocket, focusing on a short passing game while taking a few shots downfield to keep Carolina’s defense honest.

If the team can return both Kadarius Tony and Kenny Golladay, Jones will have more targets to work with in the passing game and therefore have an increased probability of scoring more points. Given Carolina is a top 10 defense in points allowed per game and Kansas City falls in the bottom six, the Giants should have a good opportunity to put together some successful drives and at least push the Chiefs to the end.

If Toney is able to play, expect him to be a catalyst in this game, using his unique agility to force missed tackles and churn out yards. It was clear the Giants missed Toney last weekend, as he utilized play designs meant for the rookie, but instead got the ball to players like Evan Engram and Darius Slayton, which didnâ€™t provide the same result.