Did the New York Giants land an undrafted stud in OL Kyle Murphy? 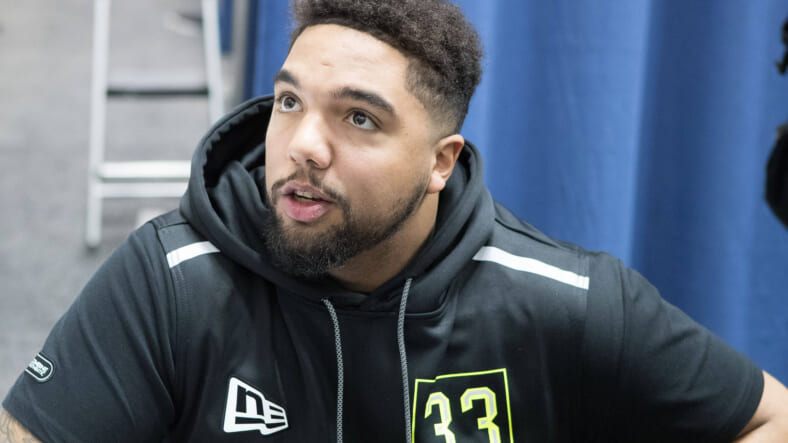 Taking a look at what the New York Giants are getting in Rhode Island offensive lineman, Kyle Murphy:

One thing general manager Dave Gettleman brought to the Giants when he signed on two years ago was an impeccable ability to evaluate offensive line talent. While with the Carolina Panthers, he landed multiple Pro Bowl-caliber linemen in the middle rounds stretching from 2013 to 2017.

The one thing we can trust with Gettleman is that he rarely misses on players at this position, which is why we should be confident in the talent he landed this past NFL draft. The Giants selected Andrew Thomas with the fourth overall pick, Matt Peart with their third-round selection, and Shane Lemieux in the fifth round. The Giants didnâ€™t stop there, though, as they also sign undrafted free agent out of Rhode Island, Kyle Murphy.

Big Blue has lofty expectations for one former undrafted free agent, Nick Gates. Gates performed well in his rookie season in 2019, showing his versatility from moving around from guard to tackle to supplement injuries. He was projected as a possible starter for next season, and there is still a possibility he could slide into the center spot. I imagine he will also compete at right tackle with Nate Solder, who will likely move over given the injection of Andrew Thomas.

However, Murphy is the focus in this article, and standing at 6-foot-4 and 302 pounds, he has the tangible traits to develop into a solid player. Playing in 43 games and starting in 36, Murphy is flexible and adaptable to all of the positions on the line. He has solid athleticism and good strength to pair with it. His ability to mirror pass rushers and anchor is impressive, considering the talent he faced off against while playing with Rhode Island. He has minimal experience against FBS defenders, and faster edge rushers can cause problems. However, he was a team captain last season and a former basketball player, attesting to his athleticism and ability to move adequately.

I expect the Giants to develop him over the course of 2020 and beyond, but considering how well Gates turned out, there is hope that Murphy can also become a possible contributor. He has the tangible upside to leave his mark in the future.