Did the Giants land a UDFA steal off the Raiders’ practice squad in Madre Harper? 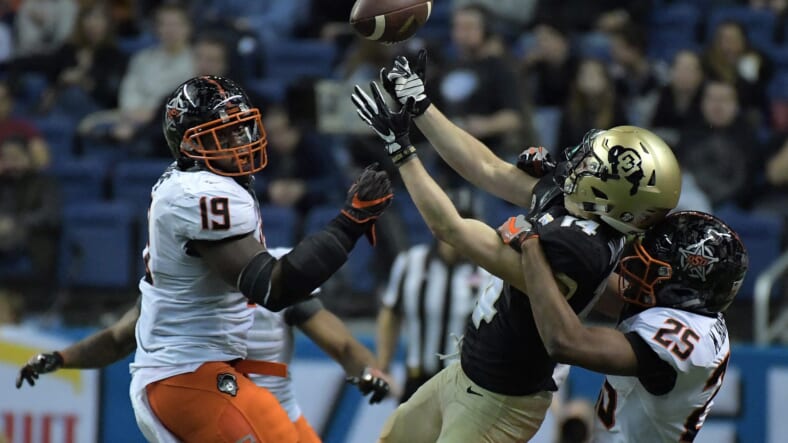 The New York Giants have taken a youth approach toward this season and the rebuilding of the roster under new head coach Joe Judge. The turnover of the coaching staff and management indicated sweeping changes were going to be made, and so far, those changes have only lead to an 0-3 start to the season. It was always optimistic to think the Giants would be a playoff-contending team, with the majority of their offensive line retooled and their defense turned over. The secondary is nearly entirely new, and their pass rushers consist of inexperience and inconsistencies.

Ultimately, as fans, we must realize that the team isnâ€™t anywhere close to being competitive. As displayed against the San Francisco 49ers in week three, not only were they out-gunned, the 49ers displayed advanced schematics that overwhelmed the Giants on all fronts. It does prove that coaching is a major factor and can be the difference-maker on any given day. San Francisco essentially walloped the Giants with reserve players, mainly thanks to their fantastic scheme on both sides of the ball.

However, the Giants must stick with the mentality and not buy into the losing. Going out and signing veterans to help bolster the team is not what they need right now, they need to continue building together and establish some sort of chemistry within each unit. As stated above, thereâ€™s not a single unit aside from the interior defensive line that has played consistent snaps together over the course of an entire season.

Management made another move this week to help add youth to their ranks. After releasing running back Rod Smith and quarterback Cooper Rush from the practice squad, the Giants went out and signed Madre Harper from the Las Vegas Raidersâ€™ practice squad. They had to entice him with a 25K bonus to leave Las Vegas, but his attributes are strong and represent potential.

In the evaluation of Harper, the plus column is filled with physical traits and descriptions of athletic explosiveness. The minus column is populated with all things related to technique, instincts and overall coverage savvy. The bottom line is that Harper has outstanding size and speed to go along with rare length as a cornerback. He will need to be enrolled in â€œTechnique 101â€ in order to learn fundamentals and work on the nuances of the position.

Athletic players with high upside are precisely what the Giants should be looking for. Harperâ€™s primary deficiencies are in the technical categories, which is something Big Blue can help him with. At 23 years old, Harper is a 6-foot-1 and 190-pound corner.

Considering the Raiders drafted two cornerbacks this past year, an undrafted rookie making the practice squad is a good accomplishment. It shows his talent in a nutshell and the upside he holds for the time being. The Giants obviously saw that in Harper and will now try to unlock his potential as they search for a CB2.