Could the New York Giants Trade Down With the Las Vegas Raiders? 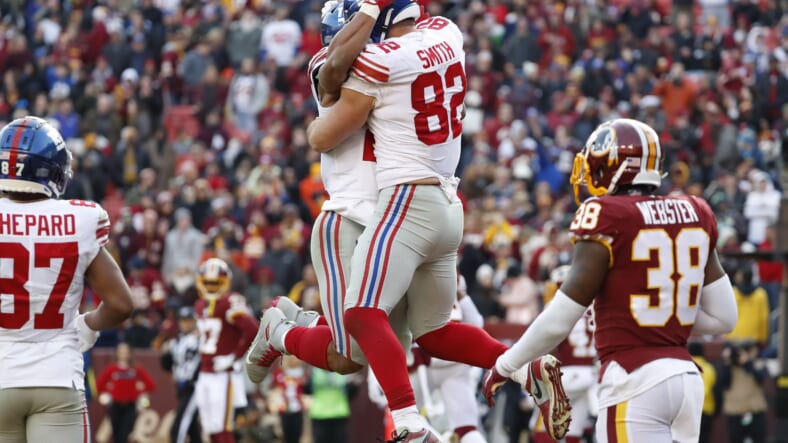 The concept of the New York Giants trading down in this year’s draft has been present for months now. Plenty of mock drafts have suggested the Giants trading out of their No. 4 slot and acquiring more picks to help them build for the future. The majority of these mocks have had one thing in common – Big Blue making the trade with a quarterback-needy team. The two teams that appear most likely to pull off the trade are the Miami Dolphins and LA Chargers, but there’s another team that could pull off a blockbuster deal – the newly relocated Las Vegas Raiders. A few things would have to happen before the trade could even be pondered, but come April, anything is possible.

Could the New York Giants Trade Down With the Las Vegas Raiders?

The Derek Carr situation in Vegas

The first, and perhaps most unlikely, part of this scenario is the Raiders moving on from QB Derek Carr. Carr has been with the team since 2014 and made the pro bowl every season from 2015-17. But since Head Coach John Gruden took over in 2018, things have not been as positive. The Raiders have won just eleven games, and Carr’s numbers have dipped drastically. But there is a major issue preventing Vegas from simply trading Derek Carr and finding their QB of the future – Carr’s contract.

Back in 2017, Derek Carr signed a 5-year, $125 million deal. The deal was, at the time, the biggest in NFL history. Finding a team willing to take on a huge contract that doesn’t expire until the end of the 2022 season would be almost impossible. But there is one team reportedly that might have an interest, and is working to clear cap space – the Chicago Bears. Chicago recently cut cornerback Prince AmukamaraÂ and wide receiver Taylor Gabriel in order to save $13.5 million in cap space.

Before Chicago could acquire Carr though, they would have to move on from former No. 2 overall pick, Mitch Trubisky. Trubisky has been a sub-par player in each of his first three seasons and has shown very little development. The Bears could either cut him and eat up the money he is due for 2020, or look for a possible trade partner. If all of this falls into place, a path for Derek Carr to the Bears could appear.

The Raiders would need a QB

If Vegas were to pull the trigger on a Carr trade, they would need to find his replacement. Luckily for them, the Giants are sitting at No. 4 listening to offers. Besides the projected number one pick Joe Burrow, the Raiders would get to choose from every top QB prospect. And what makes this scenario even more possible is how much draft capital the Raiders possess.

Las Vegas is one of just three teams in this year’s draft to have multiple first-round draft picks. They own the No. 12 pick, as well as the No. 19 pick, which they acquired from the Chicago Bears back in 2018. Possibly obtaining two first-round picks would be very enticing for Giants GM Dave Gettleman. Vegas has the draft capital to make the trade happen and it would be very smart of the Giants to consider the idea of trading out of the top five.

While the premier, well-known prospects may be off the board come picks 12 and 19, elite talent will still be there. A name that has been tied to the Giants this offseason is edge rusher A.J. Epenesa out of Iowa. Epenesa has been widely regarded as the second-best edge rusher in the entire draft, and most mock drafts have him going in the middle of the first round.

Say the Giants pick Epenesa at No. 12, they could go in a number of different directions. They could look to fix the offensive line by selecting center Cesar Ruiz out of Michigan, considered by many to be the best center in this year’s draft. Or they could choose to continue rebuilding their defense by selecting linebacker Kenneth Murray out of Oklahoma, a player with excellent athleticism and great tackling ability.

Those are just a few names that are projected to be stars at the next level that will still be available if the Giants trade down with the Raiders. A lot of pieces of the puzzle would have to fall into place for any of this to happen, but it’s possible. New York could greatly improve their rebuild if they reached a deal with Las Vegas.